Traction Drive Rating and Energy Consumption – The speed-time curve of Fig. I0.6(a) is reproduced in Fig. 10.9. For simplification in calculations, it is approximated by a trapezoidal curve having constant values for acceleration and deceleration. As the area beneath curve represents distance covered, the area of trapezoidal curve is chosen equal to the area of actual curve. 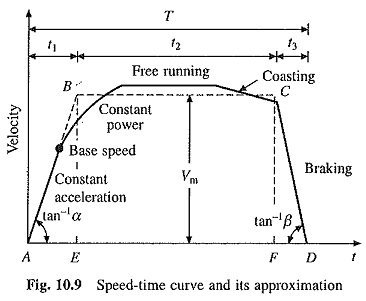 Let D be the distance in km, T the time taken by train to move from A to D in sec, Vm the free running speed of trapezoidal curve in km/hr (kmph) and α, β = acceleration/deceleration in km/hr/sec (kmphps).

From the trapezoidal curve,

1. Tractive effort required to accelerate the train mass horizontally (in newtons) at an acceleration of α kmphps is

where M is the mass in tonnes.

2. Tractive effort required to accelerate the rotating parts: Rotating parts consists of wheels, axles, gears and rotor of the motor. The inertia of gears and axles can be ignored in comparison to that of wheels. Moment of inertia of wheels

where Jw is the moment of inertia of one wheel, kg-m2 and Nx the number of axles on the train.

Then moment of inertia of motors referred to wheels

where Mc is defined as the effective mass of the train. It accounts for rotating parts in addition to the train mass. It is around 8-15% higher than M. Equation (10.12) can also be written as

Now, tractive effort required to overcome force due to gravity will be

where V is the speed of the train, and A, B, C are constants. Eq. (10.16) suggests that it is difficult to estimate the train resistance. Since it is quite small compared to Fa, an approximate value of Fr can be used and is often assumed as r newtons per tonne weight of the train. Thus,

For calculating Traction Drive Rating, r is chosen to be 20 N/tonne.

The positive sign is used for the train movement up-gradient and negative for down the gradient.

where R is the radius of the driving wheels in meters.

where ηt is the efficiency of transmission.

where N is the number of motors.

When deciding motor rating, maximum gradient allowed while laying down the track should be considered.

An estimate of energy required to operate train is needed so that running expenses can be calculated. To facilitate these calculations the term specific energy consumption has been defined as the energy consumed in watt-hours per tonne of train weight and per kilometer of distance travelled. The energy output at the driving axles is spent to:

Energy output at the driving axles to accelerate the train (Ea)

Energy output at the driving axles to overcome the gradient (Eg)

where D1 is the distance in km for which the power remains on. From the trapezoidal curve this distance is AF which is equal to the area ABCF. Thus

where η is the efficiency of transmission and motor.

When regenerative braking is used, energy regenerated is fed back to the source, thus reducing specific energy consumption. Proceeding as above, we obtain energy output at the driving axle Eb as follows:

where Vb is the initial speed during braking, + ve sign is for up-gradient and -ve for down gradient (for second term on right side only).

The maximum tractive effort that can be applied without wheel slip

where μ is the coefficient of adhesion and Md the adhesive weight or weight on the driving wheels.