Coefficient of Adhesion in Traction:

If at the points of contact between driving wheel and the track, force applied is large, the wheels may slip, then the wheels turn but carriage remains stationary.

A very important factor in traction drives, Coefficient of Adhesion in Traction (μa), provides a quantitative measure of the tendency of wheels to slip and is defined as:

When wheel of a train slips at start, it slides against the same point on the rail. Due to friction and heat produced, rail surface is damaged at the point of contact commonly called ‘burning of track‘. It further increases the tendency to slip. As a result, the life of track and wheels reduce. In road vehicles, if wheel slip occurs when vehicle is already in motion, it not only reduces the life of tyres, but can lead to serious accidents as the driver looses complete control on the vehicle. That is why every care is taken in all electrical vehicles to avoid wheel slip.

These are explained below.

Coefficient of Adhesion in Traction decreases with increase in speed. The nature of variation is shown in Fig. 10.5. If oil, grease, water, snow and mud fall on the rail or on wheel surface, it will be shifted towards left. 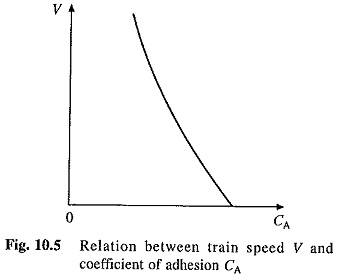 It also depends on the nature of speed-torque characteristics of driving motor and has a higher value for motor with low regulation of speed i.e. when for a given increase of speed drop in torque is large. When a wheel slips, the speed of driving motor increases. The torque drops by a large amount in motors with low regulation of speed and the wheels regain their grip on rails immediately avoiding slip.

In a locomotive more than one motors are employed. They may be connected in suitable series and parallel combination. The ability of locomotive to cross a section of the track with low adhesive coefficient depends on this combination of series parallel connection. To understand this let us consider case of two motors with the option of connecting them either in series or in parallel; the power modulator can always be designed to obtain voltage suitable for any of these connections. Due to the bad patch on the track, let the wheels coupled to one motor slip. The speed of this motor will increase, decreasing the current and torque. When the two motors are connected in series, current and torque of the other motor will also decrease, decreasing the total available torque. When connected in parallel, their current and torque are independent. Therefore, the current and torque of other motor will not decrease, i.e. the total torque will be higher. Thus, according to Eq. (10.1), for the same condition of track, coefficient of adhesion will have a higher value for the parallel connection. Since the maximum torque that can be applied without wheel slip is higher for parallel connection, there is greater chance for the train to negotiate bad patch on the track without wheel slip. When the locomotive has four motors, from the point of view of the Coefficient of Adhesion in Traction, the best connection will be all motors in parallel. Next best will be two pairs of series connected motors in parallel and worst will be all the four motors in series.

A power modulator capable of allowing stepless change in motor voltage is preferable from the point of view of wheel slip. If the voltage can only be controlled in steps, then at the time of speed change, motor torque may exceed the value at which wheels slip. For example in 25 kV ac traction using tap changers„ the dc motors’ voltage can be controlled only in discrete steps. Whenever changeover is done to increase the speed, the motor voltage increases abruptly causing a step increase in current and torque. Thus during transition, the instantaneous value of torque is much larger than what would occur if the motor voltage is gradually increased with speed. Therefore, the tendency for wheel slip is minimised if the power modulator is capable of providing stepless change in voltage.

Coefficient of Adhesion in Traction is also affected by the speed of response of power modulator and drive. When a wheel slips, the wheel slip detection circuit gives command for the reduction of motor torque so that the slipping wheel can regain the grip. In a drive where the torque can be reduced faster, the tendency for wheel slip will be lower.