Nature of Traction Load describes as when the train runs at a constant velocity on level track, a number of frictional forces oppose its motion. The friction at bearings, guides etc. is classified as Internal Friction.

A third category consists of air friction which is independent of weight of train but depends upon its size and shape, and velocity and relative direction of wind. All these frictional forces together are known as Train Resistance.

Variation of train resistance (Fr) with speed (V) is shown in Fig. 10.4; load torque vs speed curve will have similar nature. The train resistance (or load torque) can also be identified in terms of common classification of friction such as windage, viscous friction, coulomb friction and stiction (Fig. 2.6). Stiction has a large value and the influence of air friction, which varies as the square of speed, is quite prominent at high speeds. 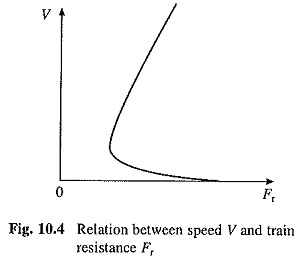 When deciding torque requirements of driving motors, the torque components required to provide acceleration and to overcome gravity must also be considered.

Therefore, only those drives which develop large torque from zero to the base speed are suitable for Nature of Traction Load application.