When interrupting small inductive currents such as transformer excitation currents, circuit breakers tend to clear before the natural current zero is reached. This is because the low-current ionized conducting path may become prematurely unstable, forcing the low arc current to zero along a very steep wave front. This phenomenon is known as current chopping and this in turn is responsible for inducing a high voltage transient across the breaker gap.

If the chop occurs at a current i the stored energy in the inductance is 1/2 Li2 which will discharge into the stray capacitance; equating these energies gives a voltage across the breaker of e = i√L/C which may reach dangerous values. Figure (14.15) illustrates the current chopping phenomena, it is quite possible that the prospective value of voltage given by e = i√L/C is quite high as compared to the dielectric strength gained by the gap so that the breaker restrikes and again the current is chopped and restriking occurs till finally the current is suppressed without a restrike. 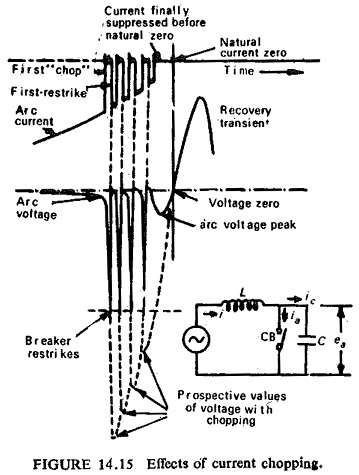 The thermal clearance and the increase in voltage across the contact gap may occur more or less at the same time, but with a high voltage air-blast circuit breaker operating under normal conditions thermal clearance may take place before the arc voltage zero, and therefore before the onset of the restriking voltage transient. This is illustrated in Fig. (14.16). 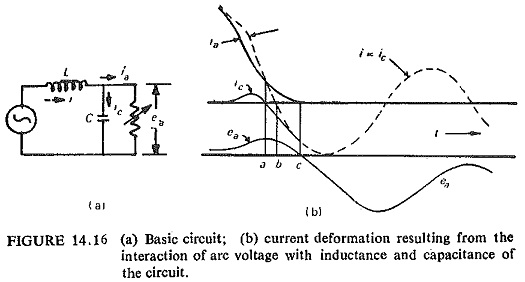 Owing to this premature reduction of the current, and to the fact that only a small voltage exists across the contacts, near current zero, the power input to the arc is relatively small and thermal clearance is. facilitated. It is therefore only after some further period following arc extinction that the full value of the restriking voltage appears across the contacts.

An air-blast circuit breaker not shunted by capacitance would probably extinguish the arc by the same basic mechanism, but the time during which post-zero conductivity appears would be reduced.

In practice some capacitance in parallel with the circuit breaker always exists and it is possible for extinction to take place before voltage zero. This premature supression of the arc current by diversion into shunt capacitance is a basic form of current chopping. 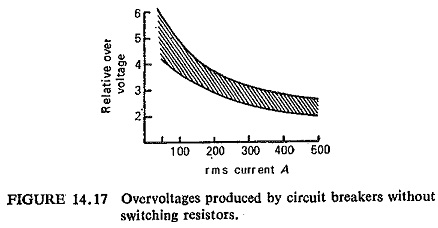 As the rms current is reduced, the per unit over voltage rises to a maximum when the peak value of the current is chopped. Over voltages are reduced by the voltage-grading resistors shunting the interrupters; the amount of the reduction however depends strongly on the inductance and inversely on the capacitance of the circuit. A resistance of 5-10 KΩ per interrupter is usually sufficiently low to give adequate voltage grading, but at transmission voltages, values as low as 1-2 KΩ are necessary if over voltages are to be limited to 2.0-2.5 pu at the lower values of interrupted current.