There exist many practical situations in which multiple filtering and band pass analysis are required. In multiple filtering, one specific operation (for example low pass, high pass, band pass, etc.) is required to be performed on many signal channels presented as input data, e.g. in multiplex systems. In band pass analysis, many Bandpass Analysis filtering operations, which are in general adjacent to one another so as to cover the entire signal spectrum, are performed on a single signal channel present as input data.

Figure 15.44 shows the typical structure of a digital filtering processor per­forming multiple filtering operations on N different input data channels. The different channel data are sent through a multiplexer to an input memory (RAM) in which the data are organised in the most convenient way, subject to the , actual signal processing to be performed. From the memory the data are sent to a fast ALU, where they are processed using the appropriate filter coefficients given by another memory (ROM). The output data can again be obtained on N separate channels through a demultiplexer. All operations are under the timing and control of a general program control. If recursive type (IIR) digital filtering is to be performed, the additional output memory, shown with the dashed lines in Fig. 15.44, is required. 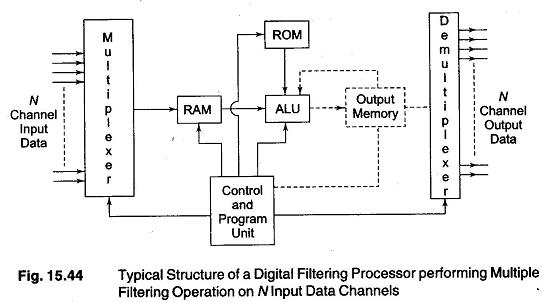