In the past many widespread blackouts have occurred in interconnected power systems. Therefore, it is necessary to ensure that power systems should be operated most economically such that power is delivered reliably. Reliable operation implies that there is adequate power generation and the same can be transmitted reliably to the loads. Most power systems are designed with enough redundancy so that they can withstand all major failure events. Here we shall study the possible Contingency Analysis in Power System and remedial actions required by two main failure events: line outages and generating unit failures. 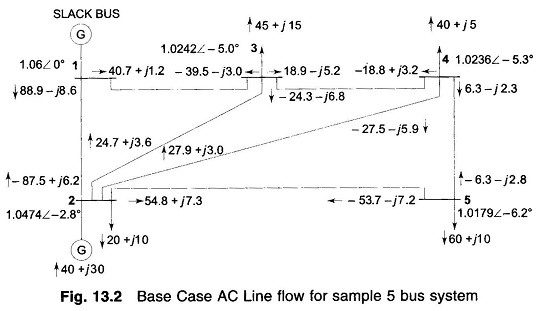 To explain the Contingency Analysis in Power System problem briefly, we consider the five-bus system of Reference. The base case load flow results for the example are given in Fig. 13.2 and show a flow of 24.7 MW and 3.6 MVAR on the line from bus 2 to bus 3. Let us assume that at present, we are only interested in the MW loading of the line. Let us examine what will happen if the line from bus 2 to bus 4 were to open. The resulting line flows and voltages are shown in Fig. 13.3. 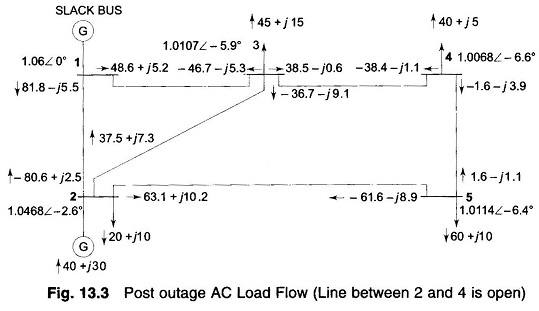 It may be noted that the flow on the line 2-3 has increased to 37.5 MW and that most of the other line flows are also changed. It may also be noted that bus voltage magnitudes also get affected, particularly at bus 4, the change is almost 2% less from 1.0236 to 1.0068 pu. Suppose the line from bus 2 to bus 5 were to open. Figure 13.4 shows the resulting flows and voltages. Now the maximum change in voltage is at bus 5 which is almost 10% less. 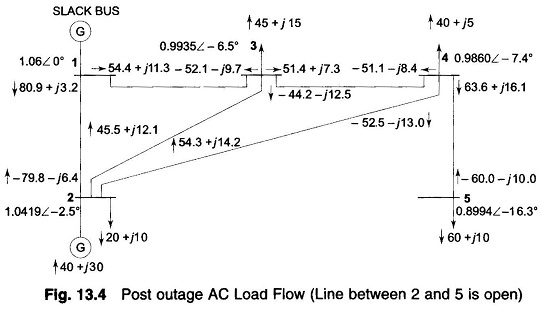 Figure 13.5 is an example of generator outage and is selected to explain the fact that generator outages can also result in changes in line flows and bus voltages. In the example shown in Fig. 13.5 all the generation lost from bus 2 is picked up on the generator at bus 1. Had there been more than 2 generators in the sample system say at bus 3 also, it was possible the loss of generation on bus 2 is made up by an increase in generation at buses 1 and 3. The differences in line flows and bus voltages would show how the lost generation is shared by the remaining units is quite significant. 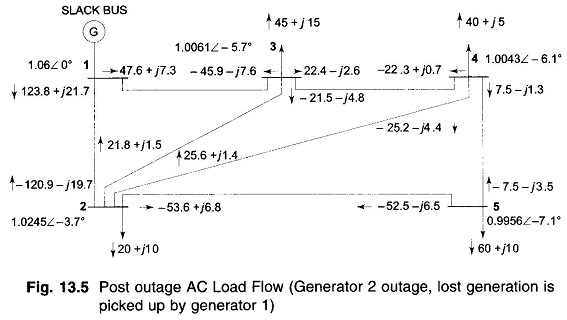 One of the important problems is the selection of “all credible outages”. Execution time to analyses several thousand outages is typically 1 min based on computer and analytical technology as of 2000. An approximate model such as DC load flow may be used to achieve speedy solution if voltage is also required, then full AC load flow analysis has to be carried out.