In a 3 Phase Relays, it is economical to build it on a single phase basis. Thus there will be three converter elements, one for each phase, but thereafter the rest of the 3 Phase Relays circuits (e.g. measuring element, output element, etc.) will be common to all the three circuits. This is shown in Fig. 1.5.

Protective System for Generators and Transformers:

Here again instead of three elements for the individual three phase transformers. These are combined in OR-gates which in turn modulate the high power control units. With this method it is also possible to combine various measuring elements to save unit construction elements. This is shown in Figs. 1.6 and 1.7. 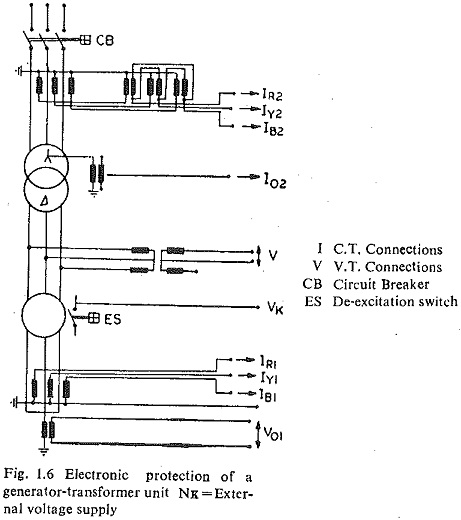 In this case of a short circuit fault the protective system will measure each busbar section and operate if all these angles are within  ± 90 electrical degrees. The differential current is used as starting quantity, while the reference value is a quantity which is in phase with the short circuit current.