Skip to content
Home » Filters » What is a Filter Circuit?

What is a Filter Circuit?:

An important characteristics of all filter networks is that they are constructed from purely reactive elements.

In measurement systems, the transducer often does not measure the physical parameter (measurand) precisely. The information present is not in standard form, hence the need for further filtering and analysis. The main factors that must be considered for accuracy are signal to noise (S/N) ratio, response time and bandwidth over which the measurements are desired. Among these the S/N ratio is the most important parameter that needs to be considered, and the use of a signal filter becomes a necessity when low level or high resolution measurements are required. The signal originating from a transducer is fed to the signal conditioner. The output signal obtained from a transducer must be reproduced faithfully. In order to obtain a faithful reproduction of the signal, it becomes necessary to eliminate any spurious or unwanted signals which may get introduced into the system, either at the transduction stage or at the signal conditioning stage.

Assuming the filter is correctly terminated in its characteristic impedance Zo, the following is applicable.

“Over the range of frequencies for which the characteristic impedance Zo of a filter is purely resistive (real), the attenuation (α) will be zero.”

“Over the range of frequencies for which the characteristic impedance Zo is purely reactive (imaginary), the attenuation (α) will be greater than zero.”

Mathematical Proof of the Theorem:

The fundamental theorem on filters can be proved by considering a simple filter circuit in the form of a symmetrical T network. Let the T network consist of series and shunt elements, as shown in Fig. 15.1(a).

The characteristic impedance Zo of the network in Fig. 15.1 is given by

Similarly, the current ratio or the propagation constant

There will be two cases for impedance values of Zo, depending on the value and sign of X1 and X2.

When Zo is real 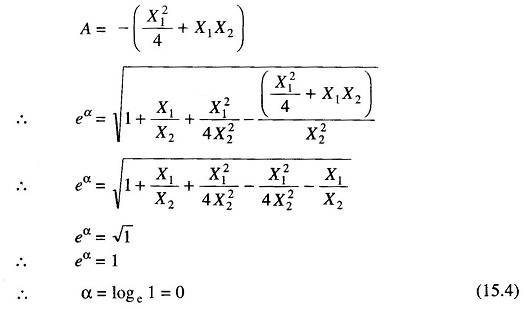 When Zo is imaginary [purely reactive]

Hence α is greater than one and real. Therefore if Zo is imaginary, α cannot be zero, and the filter circuit will have an attenuation band.