Schottky junctions have been shown and described throughout this chapter, in conjunction with various devices that use them in their construction in Figure 12-4. Accordingly it will be realized that the Schottky Barrier Diode is an extension of the oldest semiconductor device of them all the point-contact diode. Here the metal-semiconductor interface is a surface the Schottky Barrier Diode rather than a point contact. It shares the advantage of the point-contact diode in that there are no minority carriers in the reverse-bias condition; that is, there is no significant current from the metal to the semiconductor with back bias. Thus the delay present in junction diodes, due to hole-electron recombination time, is absent here. However, because of a larger contact area (barrier) between the metal and semiconductor than in the point contact diode, the forward resistance is lower and so is noise.

The most commonly used semiconductors are “the old faithfuls,” silicon and gallium arsenide. As usual, GaAs has the lower noise and higher operating frequency limits; silicon is easier to fabricate and is consequently used at X band and below, in preference to GaAs, N-type epitaxial materials are used, and the metal is often a thin layer of titanium surrounded by gold for protection and low ohmic resistance. The device sometimes bears the name ESBAR (acronym for epitaxial Schottky Barrier Diode) diode and may also be called the Hot-Electron Diode.

The latter name is given because electrons flowing from the semiconductor to the metal have a higher energy level than electrons in the metal itself, just as the metal would if it were at a higher temperature. The diodes are encapsulated in any one of the ways already shown for other diodes.

Schottky Barrier Diode are available for microwave frequencies up to at least 100 GHz. Like point-contact diodes, they are used as detectors and mixers, mounted. The noise figures of mixers using Schottky-barrier diodes are excellent, rising for as low as 4 dB at 2 GHz to 15 dB near 100 GHz. At frequencies much above X band,GaAs diodes are preferred, since they have lower noise. At the highest frequencies, point-contact diodes are preferred, since they have lower shunt capacitances. For a comparison of Schottky Barrier Diode performance with that of other low-noise front ends.

It is possible to remove the negative-resistance peak and valley region from the tunnel diode, by suitable doping and etching during manufacture. When this is done, the voltage-current characteristic of Figure 12-35 results. This shows the rather unusual situation in which, for small applied voltages, the forward current is actually much smaller than the reverse current. 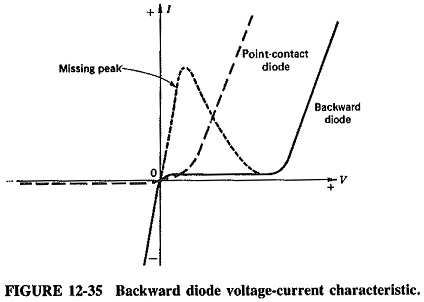 The reverse current is large, it will be recalled, because of the very high doping. On the other hand, forward current is low at first because tunneling has been stopped. This diode can therefore be used as a small-signal rectifier. It has the advantage not only of a narrow junction, and therefore a high operating speed and frequency, but also of a current ratio (reverse to forward!) which is much higher than in conventional rectifiers.

When GaAs is used, a maximum signal of about 0.9 V may be applied to the diode before it begins to conduct heavily in the forward direction. This value, although higher than for germanium (silicon is an unsuitable material), is nevertheless quite low. This naturally means that the backward diode is limited, just like the tunnel diode, to lower operating levels.

Despite this, the backward diode, or tunnel rectifier as it is sometimes called, is in quite common use. Aside from having a high current ratio in the two directions, the backward diode is a low-noise device. It is used in such applications as video detection and low-level mixing, as in Doppler radar. Another of its attractions is that it requires a local oscillator signal up to 10 dB lower than that needed by a point-contact diode.