Every Protection Systems which isolates a faulty element is required to satisfy four basic requirements:

Without reliability and selectivity the protection would be rendered largely ineffective and could even become a liability.

Reliability is a qualitative term. Quantitatively it can be expressed as a probability of failure. Failure is not confined to protective gear but may also be due to breaker defects. Therefore every component and circuit involved in fault clearance must be regarded as a potential source of failure. Failure can be reduced to a small calculated risk by inherently reliable designs backed by regular and thorough maintenance. Quality of personnel must not be overlooked when considering reliability, for mistakes by personnel are among the most likely causes of failure. Some features of design and manufacture which make relays inherently reliable are high contact pressures, dust free enclosures, well braced joints and impregnated coils. Precautions in manufacture and assembly reduce liability to failure. Components should be treated to prevent contamination. Acid fluxes and acid producing insulation should be avoided. On assembly direct handling of components should also be avoided as far as possible.

Records show that the order of likelihood of failure is: relays, breakers, wiring, current transformers, voltage transformers and battery. When relays using transistors are considered, the failure rate goes up still further.

This is the property by which only the faulty element of the Protection Systems is isolated and the remaining healthy sections are left intact. Selectivity is absolute if the protection responds only to faults within its own zone, and relative if it is obtained by grading the settings of the protections of several zones all of which may respond to a given fault.

Protective relays are required to be quick acting due to the following reasons:

The shorter the time a fault is allowed to persist the more load can be transferred between given points on the power systems without loss of synchronism. Figure (1.3) shows typical values of power which can be transmitted as a function of fault clearing times for various types of fault. 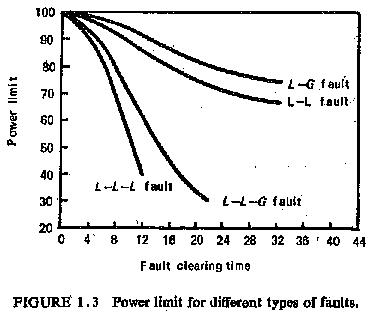 It can be seen that three phase faults have a more marked effect on the ability of the Protection Systems to remain in step and hence they must be cleared faster than the single earth fault.

On the other hand relays should not be made extremely fast, i.e. less than 10 milliseconds. This is because when there is any lightning surge on the line the surge diverters must have sufficient time to discharge the lightning to the ground; otherwise the relay will operate unnecessarily for transient conditions.

Protection must be sufficiently sensitive to operate reliably under minimum fault conditions for a fault within its own zone while remaining stable under maximum load or through fault conditions. A relay should be able to distinguish between a fault and an overload. In the case of transformers the inrush of magnetizing current may be comparable to the fault current, being 5 to 7 times the full load current. The relay should not operate for inrush currents. In interconnected systems, there will be power swings, which should also be ignored by the relay. This discrimination between faults and over-currents may either be an inherent characteristic of the relay or may be achieved by connecting auxiliary devices like the minimum voltage relay. It may be noted that the word discrimination is sometimes used to include selectivity.

The Protection Systems is divided into protective zones as explained earlier, each having its protective relays for determining the existence of a fault in that zone and having circuit breakers for disconnecting that zone from the system.

The relays operate usually from currents and voltages derived from current and potential transformers or potential devices. A station battery usually provides the circuit breaker trip current. Successful clearing depends on the condition of the battery, the continuity of the wiring and trip coil, and the proper mechanical and electrical operation of the circuit breaker as well as the closing of the relay trip contacts.

In the event of failure of one of these elements, so that the fault in a given zone is not cleared by the main or the primary protection scheme, some form of backup protection is ordinarily provided to do the next best thing. This means first of all to clear the fault automatically if at all possible, even though this requires disconnection of a considerable portion of the Protection Systems. The measures taken to provide backup protection vary widely depending on the value and importance of the installation and the consequence of failure.