The electrical energy is almost exclusively generated, transmitted and distributed in the form of alternating current. Therefore, the question of power factor immediately comes into picture. Most of the loads (e.g. induction motors, arc lamps) are inductive in nature and hence have low lagging power factor. The low power factor is highly undesirable as it causes an increase in current, resulting in additional losses of active power in all the elements of power system from power station generator down to the utilization devices. In order to ensure most favorable conditions for a supply system from engineering and economical standpoint, it is important to have power factors as close to unity as possible. In this category, we shall discuss the various methods of power factors improvement.

The cosine of angle between voltage and current in an a.c. circuit is known as power factor. 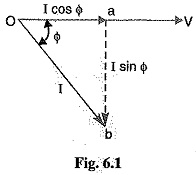 Consider an inductive circuit taking a lagging current I from supply voltage V; the angle of lag being Φ. The phasor diagram of the circuit is shown in Fig. 6.1. The circuit current I can be resolved into two perpendicular components, namely ;