To calculate Power Factor Correction Circuit, Consider an inductive load taking a lagging current I at a power factor cos Φ1. To develop Power Factor Improvement of this circuit, the remedy is to connect such an equipment in parallel with the load which takes a leading reactive component and partly cancels the lagging reactive component of the load. Fig. 6.6 (i) shows a capacitor connected across the load. The capacitor takes a current IC which leads the supply voltage V by 90°. The current IC partly cancels the lagging reactive component of the load current as shown in the phasor diagram in Fig. 6.6 (ii). The resultant circuit current becomes I′ and its angle of lag is Φ2. It is clear that Φ2 is less than Φ1 so that new p.f. cos Φ2 is more than the previous p.f. cos Φ1. 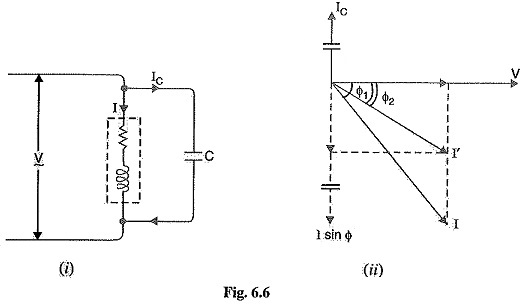 From the phasor diagram, it is clear that after Power Factor Correction Circuit, the lagging reactive component of the load is reduced to I′ sin Φ2.

Capacitance of capacitor to improve p.f. from cos Φ1 to cos Φ2 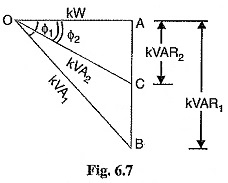 Knowing the leading kVAR supplied by the p.f. correction equipment, the desired results can be obtained.

The improvement of power factor is very important for both consumers and generating stations as discussed below :

The value to which the power factor should be improved so as to have maximum net annual saving is known as the most economical power factor.

The useful output of a power station is the kW output delivered by it to the supply system. Sometimes, a power station is required to deliver more kW to meet the increase in power demand. This can be achieved by either of the following two methods :