The low power factor is mainly due to the fact that most of the power loads are inductive and, therefore, take lagging currents. In order for Power Factor Improvement Methods, some device taking leading power should be connected in parallel with the load. One of such devices can be a capacitor. The capacitor draws a leading current and partly or completely neutralizes the lagging reactive component of load current. This raises the power factor of the load.

Illustration: To illustrate the power factor improvement using capacitor bank, consider a single phase load taking lagging current I at a power factor cos Φ1 as shown in Fig. 6.3.

The capacitor C is connected in parallel with the load. The capacitor draws current Ic which leads the supply voltage by 90°. The resulting line current I′ is the phasor sum of I and IC and its angle of lag is Φ2 as shown in the phasor diagram of Fig. 6.3. (iii). It is clear that Φ2 is less than Φ1, so that cos Φ2 is greater than cos Φ1. Hence, the power factor of the load is improved. The following points are worth noting :

2.The active or wattful component remains the same before and after p.f. correction because only the lagging reactive component is reduced by the capacitor.

Normally, the power factor of the whole load on a large generating station is in the region of 0.8 to 0-9. However, sometimes it is lower and in such cases it is generally desirable to take special steps to to improve power factor. This can be achieved by the following equipment :

1.Static capacitor: The power factor can be improved by connecting capacitors in parallel with the equipment operating at lagging power factor. The capacitor (generally known as static capacitor) draws a leading current and partly or completely neutralises the lagging reactive compo­nent of load current. This raises the power factor of the load. For three-phase loads, the capacitors can be connected in delta or star as shown in Fig. 6.4. Static capacitors are invariably used for Power Factor Improvement Methods in factories. 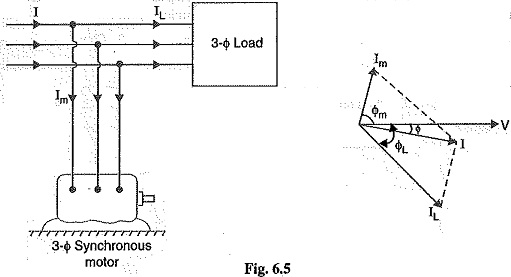 Fig 6.5 shows the Power Factor Improvement Methods by synchronous condenser method. The 3Φ load takes current IL at low lagging power factor cos IL. The synchronous condenser takes a current Im which leads the voltage by an angle Φm. The resultant current I is the phasor sum of Im and IL and lags behind the voltage by an angle Φ. It is clear that Φ is less than ΦL, so that cos Φ is greater than cos ΦL. Thus the power factor is increased from cos ΦL to cos Φ. Synchronous condensers are generally used at major bulk supply substations for Power Factor Improvement Methods.

Phase advancers have two principal advantages. Firstly, as the exciting ampere turns are sup­plied at slip frequency, therefore, lagging kVAR drawn by the motor are considerably reduced. Sec­ondly, phase advancer can be conveniently used where the use of synchronous motors is unadmissible. However, the major disadvantage of phase advancers is that they are not economical for motors below 200 H.P.