Fault Meaning and Statistics – It is useful to have some idea of the frequency of the incidence of faults on the different items of equipment in a power system. This information is of help in considering the problems of design and application of protection. Table 1.1 gives an idea of how faults are distributed in the various sections of a power system. 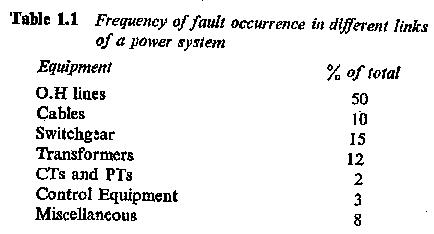 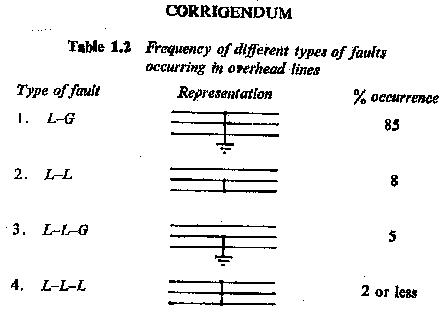 Note. The L-L-L fault, called the symmetrical three-phase fault, generally occurs due to the carelessness of operating personnel. Usually the phase lines are tied up together with a bare conductor in order to protect the lineman working on the lines against inadvertent charging of the line. Occasionally after the work is over, the lineman forgets to remove the tie-up and when the circuit breaker is closed a three-phase symmetrical fault occurs.

It is evident, therefore, that the line to ground fault occurs most commonly in overhead line practice. Fortunately a large number of these faults are transitory in nature and may vanish within a few cycles as would be the case when a twig falls across a line and a cross-arm and bums itself out or just falls down.

In our country where the neutral is not kept isolated, these earth faults do produce fairly large magnitudes of fault current. So in designing a system of protection greater attention should be paid to the reliable operation of relays under line-to-ground fault conditions.