Having discussed the manner of indicating luminance and the two components of chrominance in Color TV Transmission, it is now necessary to investigate how they may be, modulated and sent in the 6-MHz channel, without interference to monochrome TV.

The actual transmission methods used for the chroma components of the Color TV Transmission system were determined by the following requirements and observations:

This is the actual frequency generated. For simplicity, it is normally quoted as 3.58 MHz.

The 3.58-MHz reference signal is sent in the form of a brief pulse, or burst. It is superimposed on top of–the back porch of each horizontal sync pulse. It will be recalled that the duration of this period of horizontal blanking is approximately 6 μs. The burst of 3.58 MHz consists of 8 to 11 complete cycles. These occupy a period not longer than 3.1 μs, so that adequate time is available for its sending. The peak-to-peak amplitude of the burst signal is approximately 15 percent of the percentage modulation ,range of video. Since it is superimposed on the 75 percent modulation blanking level, its peak-to-peak amplitude range stretches from 67.5 percent at the lowest point (top of the black level) to 82.5 percent at the highest point (one-third of the way from blanking to sync tops). It does not interfere with monochrome TV and is usable by a color receiver, as will be seen. Note that the color burst is not sent during the vertical blanking period, during which it is not needed. 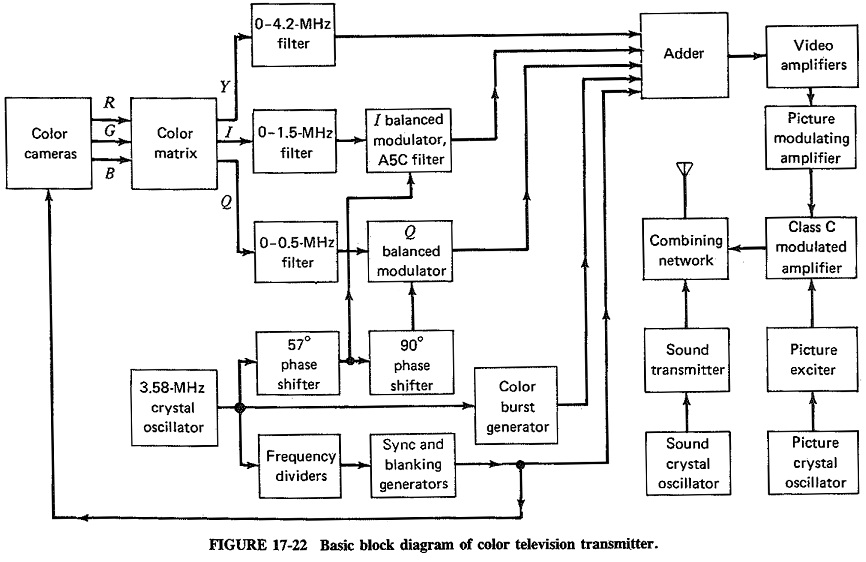 The Y, I and Q outputs from the Color TV Transmission matrix are fed to their respective low-pass filters. These filters attenuate the unwanted frequencies, but they also introduce un­wanted phase shifts. Phase-compensating networks (not shown) are inserted after the filters, to produce the correct phase relationships at the balanced modulators.

The output of the Color TV Transmission subcarrier generator is sent in three directions. One of the three outputs is used to synchronize the blanking and sync pulse generators. Their output, in turn, is transmitted as in monochrome TV, and a portion of it is used to synchronize the transmitter cameras, as well as introducing blanking into the transmitted video. The second path for the 3.58-MHz oscillator output is to the color burst generator, which is a fairly complex piece of equipment that ensures the correct transmission (and phase preservation) of the color burst. The last output from this oscillator is fed to a 57° phase shifter, to provide the necessary shift for the I signal. A further 90° phase shift is produced, giving a total of 147° for the Q signal. Note the 90° phase difference between the I and Q signals.

The I balanced modulator produces a double-sideband (suppressed-carrier) signal stretching 1.5 MHz on either side of the 3.58-MHz subcarrier. The vestigial­-sideband filter then removes the top 1 MHz from that. The output of the Q balanced modulator is a signal occupying the range of 0.5 MHz below and above the suppressed 3.58-MHz subcarrier. The added 90° phase shift puts this signal in quadrature with the I component; hence the name “Q signal.”

All these signals are fed to the adder, whose output therefore contains:

The output of the adder then undergoes the same amplifying and modulating processes as did the video signal at this point in a black-and-white transmitter. The signal is finally combined with the output of an FM sound transmitter, whose carrier
frequency is 4.5 MHz above the picture carrier frequency, as in monochrome TV.

It is worth pointing out at this stage that one of the main differences between the PAL system and the NTSC system so far described is that in the PAL system the phase of the I and Q signals is switched after every line. This tends to average out any errors in the phase of hue that may be caused by distortion or noise and tends to make this system somewhat more noise-immune. This phase alternation by line is what gives this system its name.