In this type of Brown Boveri Regulator, exciter field rheostat is varied continuously or in small steps instead of being first completely cut in and then completely cut out as in Tirril regulator. For this purpose, a regulating resistance is connected in series with the field circuit of the exciter. Fluctuations in the alternator voltage are detected by a control device which actuates a motor. The motor drives the regulating rheostat and cuts out or cuts in some resistance from the rheostat, thus changing the exciter and hence the alternator voltage. 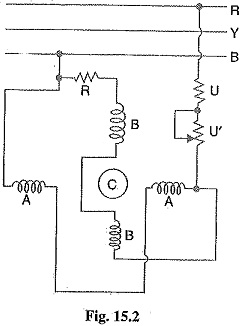 Construction. Fig. 15.2 shows the schematic diagram of a Brown Boveri Regulator. It also works on the “overshooting the mark principle” and has the following four important parts :

1.Control system: The control system is built on the principle of induction motor. It consists of two windings A and B on an annular core of laminated sheet steel. The winding A is excited from two of the generator termi­nals through resistances U and U′ while a resistance R is inserted in the circuit of winding B. The ratio of resistance to reactance of the two windings are suitably adjusted so as to create a phase difference of currents in the two windings. Due to the phase difference of A currents in the two windings, rotating magnetic field is set up. This produces electromagnetic torque on the thin aluminium drum C carried by steel spindle ; the latter being supported at both ends by jewel bearings. The torque on drum C varies with the terminal voltage of the alternator. The variable resistance U′ can also vary the torque on the drum. If the resistance is increased, the torque is decreased and vice-versa. Therefore, the variable resistance U′provides a means by which the regulator may be set to operate at the desired voltage. 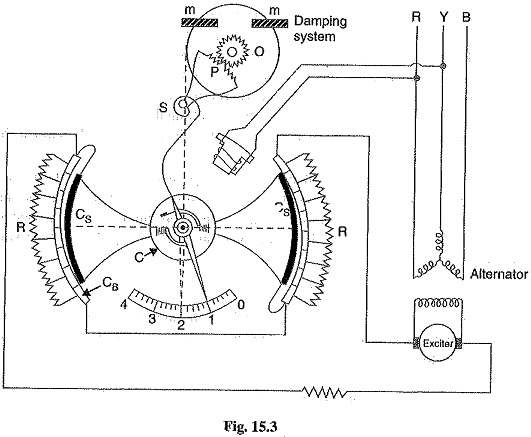 4.Damping torque: The regulator is made stable by damping mechanism which consists of an aluminium disc O rotating between two permanent magnets m. The disc is geared to the rack of an aluminium sector P and is fastened to the aluminium drum C by means of a flexible spring S acting as the recall spring. If there is a change in the alternator voltage, the eddy currents induced in the disc O produce the necessary damping torque to resist quick response of the moving system.

Suppose that resistances U and U’ are so adjusted that terminal voltage of the alternator is normal at position 1. In this position, the electrical torque is counterbalanced by the mechanical torque and the moving system is in equilibrium. It is assumed that electrical torque rotates the shaft in a clockwise direction.

Now imagine that the terminal voltage of the alternator rises due to decrease in load on the supply system. The increase in the alternator voltage will cause an increase in electrical torque which becomes greater than the mechanical torque. This causes the drum to rotate in clockwise direction, say to position 3. As a result, more resistance is inserted in the exciter circuit, thereby decreasing the field current and hence the terminal voltage of the alternator. Meanwhile, the recall spring S is tightened and provides a counter torque forcing the contact roller back to position 2 which is the equilibrium position. The damping system prevents the oscillations of the system about the equilibrium position.