A Booster Generator is a D.C. generator whose function is to inject or add certain voltage into a circuit so as to compensate the IR drop in the feeders etc. 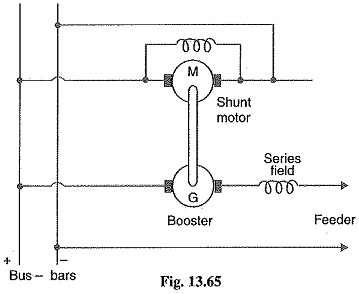 It might be suggested to compensate the voltage drop in the feeder by over compounding the generators instead of using a booster. Such a method is not practicable for feeders of different lengths because it will disturb the voltage of other feeders. The advantage of using a Booster Generator is that each feeder can be regulated independently a great advantage if the feeders are of different lengths.

It is worthwhile to make a comparison between Three Wire and Two Wire DC Distribution. It will be shown that there is a great saving of conductor material if we use 3-wire system instead of 2-wire system for d.c. distribution. For comparison, it will be assumed that

Current through outers in case of 3-wire system is

Since efficiency of transmission is the same, it means losses are the same i.e.

Therefore the area of X-section of outers in 3-wire case will be one-fourth of each conductor in 2-wire case.

If l is the length of the line, then,

Ground detectors are the devices that are used to detect/indicate the ground fault for ungrounded d.c. systems. When a ground fault occurs on such a system, immediate steps should be taken to clear it. If this is not done and a second ground fault happens, a short circuit occurs. Lamps are generally used for the detection of ground faults. They are connected for ungrounded 2-wire system as shown in Fig. 13.66. 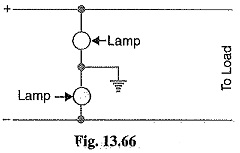 Each lamp should have a voltage rating equal to the line voltage. The two lamps in series, being subjected to half their rated voltage, will glow dimly. If a ground fault occurs on either wires, the lamp connected to the grounded wire will not glow while the other lamp will glow brightly.