What is Shockley Diode? – Symbol, Operation and Applications

The four layer diode, also called the Shockley diode after its in­ventor Willian Shockley, is essentially a low-current SCR without a gate. It is classified as a diode because it has only two exter­nal terminals viz. anode and cathode. Because of its four doped regions, it is often called a P-N-P-N diode. The basic structure, two transistor version, equivalent transistor circuit and schematic symbol of a Shockley diode are shown in Fig. 26.55. 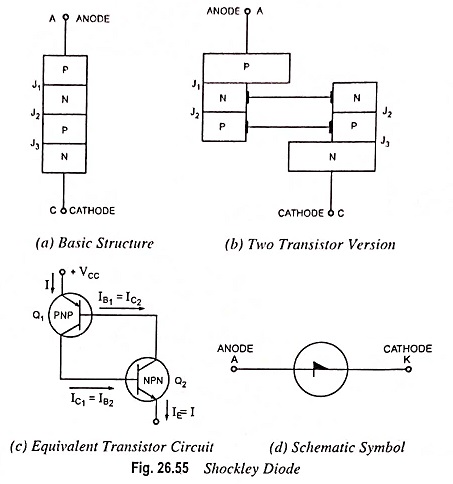 where IE is the emitter current, ICO is the reverse saturation current, and α is the short-circuit common-base forward current gain.

But the sum of currents IC1 and IC2 is equal to the total cur­rent through the device i.e.,

Solving above equations we have

From above Eq. (26.25) it is obvious that the current I through the device is small (approximately the sum of collector saturation currents of the two equivalent transistors) as long as the sum (α1 + α2) is small as compared to unity. It seems that the current I increases rapidly when the sum (α1 + α2) approaches unity. The current does not increase beyond limit as Eq. (26.25) implies, however, because the derivation is no longer valid as (α1 + α2) approaches unity. Since junction J2 becomes forward biased in the forward conducting state, both transistors become saturated after switching. The two transistors remain in saturation while the device is in the forward conducting state, being held in saturation by the device current.

Because there are no trigger inputs, the only way to switch the device on is to increase the anode-to-cathode voltage VAK to the for­ward switching voltage, and the only way to open it is by low-current drop out. With a four layer diode it is not necessary to reduce the current all the way to zero to open the latch. The internal transistors of the device will come out of saturation when the current is reduced to a low value, called the holding current. The forward switching voltage Vs is equivalent of the SCR forward breakover voltage, and the minimum current at which device will switch on is the switching current Is.

Voltage-current characteristic of a Shockley diode is shown in Fig. 26.56. The device has two operating states: conducting and nonconducting. In nonconducting state, it operates on lower line with negligible current and a voltage less than switching voltage or breakover voltage. When the voltage tries to exceed the breakover voltage, the device breaks down and switches along the dotted line to the conducting or on-state. The dotted line indicates an unstable or a temporary condi­tion. The device can have current and voltage values on this dot­ted line only briefly as it switches between the two stable operat­ing states. In conducting state or in on-state, the device operates on the upper line. As long as the current through the device is greater than the holding current IH, then the voltage across it is slightly greater than knee voltage, VK. When the current falls below the level of the holding current IH, the device switches back along the dotted line to the nonconducting or off-state. 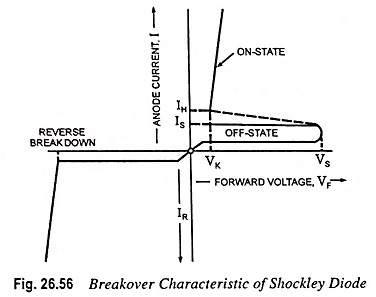 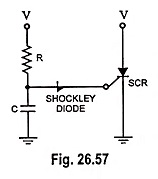 Another application of this diode is]as a relaxation oscillator.