In a broad sense, the term Principles of Communication Systems refers to the sending, receiving and processing of information by electronic means. Communications started with wire telegraphy in the eighteen forties, developing with telephony some decades later and radio at the beginning of this century. Radio communication, made possible by the invention of the triode tube, was greatly improved by the work done during World War II. It subsequently became even more widely used and refined through the invention and use of the transistor, integrated circuits and other semiconductor devices. More recently, the use of satellites and fiber optics has made communications even more widespread, with an increasing emphasis on computer and other data communications.

A modern Principles of Communication Systems is first concerned with the sorting, processing and sometimes storing of information before its transmission. The actual transmission then follows, with further processing and the filtering of noise. Finally we have reception, which may include processing steps such as decoding, storage and interpretation. In this context, forms of communications include radio telephony and telegraphy, broadcasting, point-to-point and mobile communications (commercial or military), computer communications, radar, radio telemetry and radio aids to navigation. All these are treated in turn, in following chapters.

In order to become familiar with these systems, it is necessary first to know about amplifiers and oscillators, the building blocks of all electronic processes and equipment. With these as a background, the everyday Principles of Communication Systems concepts of noise, modulation and information theory, as well as the various systems themselves, may be approached. Any logical order may be used, but the one adopted here is, basic systems, Communications Systems processes and circuits, and more complex systems, is considered most suitable. It is also important to consider the human factors influencing a particular system, since they must always affect its design, planning and use.

Before investigating individual systems, we have to define and discuss important terms such as information, message and signal, channel , noise and distortion, modulation and demodulation, encoding and decoding. To correlate these concepts, a basic block diagram of communication system is shown in Figure 1-1.

The Principles of Communication Systems exists to convey a message. This message comes from the information source, which originates it, in the sense of selecting one message from a group of messages. Although this applies more to telegraphy than to entertainment broadcasting, for example, it may nevertheless be shown to apply to all forms of communications. The set, or total number of messages, consists of individual messages which may be distinguished from one another. These may be words, groups of words, code symbols or any other prearranged units.

Information itself is that which is conveyed. The amount of information contained in any given message can be measured in bits or in dins. The greater the total number of possible selections, the larger the amount of information conveyed. To indicate the position of a word on this page, it may be sufficient to say that it is on the top or bottom, left or right side, i.e., two consecutive choices of one out of two possibilities. If this word may appear in any one of two pages, it is now necessary to say which one, and more information must be given. The meaning (or lack of meaning) of the information does not matter, from this point of view, only the quantity is important. It must be realised that no real information is conveyed by a redundant (i.e., totally predictable) message. Redundancy is not wasteful under all conditions. Apart from its obvious use in entertainment, teaching and any appeal to the emotions, it also helps a message to remain intelligible under difficult or noisy conditions.

Unless the message arriving from the information source is electrical in nature, it will be unsuitable for immediate transmission. Even then, a lot of work must be done to make such a message suitable. This may be demonstrated in single sideband modulation, where it is necessary to convert the incoming sound signals into electrical variations, to restrict the range of the audio frequencies and then to compress their amplitude range. All this is done before any modulation. In wire telephony no processing may be required, but in long-distance communications, a transmitter is required to process, and possibly encode, the incoming information so as to make it suitable for transmission and subsequent reception.

Eventually, in a transmitter, the information modulates the carrier, i.e., is superimposed on a high-frequency sine wave. The actual method of modulation varies from one system to another. Modulation may be high level or low level, and the system itself may be amplitude modulation, frequency modulation, pulse modulation or any variation or combination of these, depending on the requirements. Figure 1-2 shows a block diagram of high-level amplitude-modulated broadcast radio transmitter of a type.

The acoustic channel (i.e., shouting!) is not used for long-distance communications, and neither was the visual channel until the advent of the laser. “Communications,” in this context, will be restricted to radio, wire and fiber optic channels. Also, it should be noted that the term channel is often used to refer to the frequency range allocated to a particular service or transmission, such as a television channel (the allowable carrier bandwidth with modulation).

It is inevitable that the signal will deteriorate during the process of transmission and reception as a result of some distortion in the system, or because of the introduction of noise, which is unwanted energy, usually of random character, present in a transmission system, due to a variety of causes. Since noise will be received together with the signal, it places a limitation on the transmission system as a whole. When noise is severe, it may mask a given signal so much that the signal becomes unintelligible and therefore useless. In Figure 1-1, only one source of noise is shown, not because only one exists, but to simplify the block diagram. Noise may interfere with signal at any point in a Principles of Communication Systems, but it will have its greatest effect when the signal is weakest. This means that noise in the channel or at the input to the receiver is the most noticeable.

There are a great variety of receivers in Communications Systems, since the exact form of a particular receiver is influenced by a great many requirements. Among the more important requirements are the modulation system used, the operating frequency and its range and the type of display required, which in turn depends on the destination of the intelligence received. Most receivers do conform broadly to the superheterodyne type, as does the simple broadcast superheterodyne am receiver whose block diagram is shown in Figure 1-3. 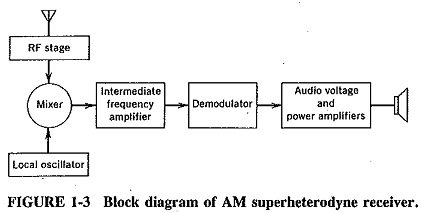 Receivers run the whole range of complexity from a very simple crystal receiver, with headphones, to a far more complex radar receiver, with its involved antenna arrangements and visual display system. Whatever the receiver, its most important function is demodulation (and sometimes also decoding) Both these processes are the reverse of the corresponding transmitter modulation processes.

As stated initially, the purpose of a receiver and the form of its output influence its construction as much as the type of modulation system used. The output of a receiver may be fed to a loudspeaker, video display unit, teletypewriter, various radar displays, television picture tube, pen recorder or computer.. In each instance different arrangements must be made, each affecting the receiver design. Note that the transmitter and receiver must be in agreement with the modulation and coding methods used (and also timing or synchronization in some systems).