If only two sites are to be connected, switching is not required. The two facilities are interconnected on a point-to-point basis. However, switching is likely to be required where three or more sites need to be interconnected. The various types of Switching Systems in Digital Communication described earlier can all be used for data transmission over networks.

A single pair of wires (two-wire circuit) can be used for a unidirectional transfer of data in the simplex mode. In a half-duplex mode, for data to pass in both directions on a two-wire circuit, it is necessary for the two sites to take turns in transmitting over the circuit. A full-duplex system will use a four-wire circuit with one pair of wires for each direction of transmission. The best type of system for a particular application will depend on the nature of the data requirements and the operation of the equipment.

In addition to the type of circuit, the type of connection must be chosen. If the site has continuous or very frequent interconnection requirements, a dedicated line is appropriate. Many users find that their usage is not continuous, and they are able to realize significant savings by using a switched or dial-up system, be it in the public switched network or a private network. This method of operation can be very economical and efficient for users who need access to the computer or other data sites on an infrequent basis or from changing locations. 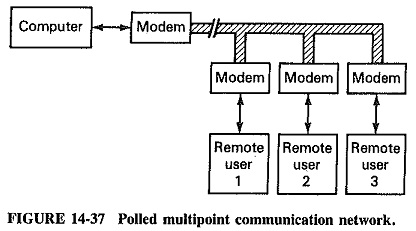 An extension of the point-to-point system is the polled multipoint system, which interconnects a common source such as a computer with a remote location having several users. A simple polled system (Figure 14-37) is seen to be similar to the two-station system, except that each of the several users now connects to the common circuit through a modem. The computer checks (polls) each user in turn to determine whether one of them is requesting interconnection. When the request is received by the computer, the requesting user’s modem is given control of the circuit and data is transferred. If the source has data to transfer to one of the users, it seizes control of the circuit and sends the appropriate command to interconnect the desired user to the line. The polling process and the transfer of data follow specific procedures called Protocols.

Networks can be used to interconnect a large number of users through only a few transmission circuits. While only a few users on either end of the network are connected at any one time, the switching capability contributes to significant economies. A typical Switching Systems in Digital Communication of this type is shown in Figure 14-38.

Modern Switching Systems in Digital Communication benefit from microprocessor technology and can be termed “smart switchers.” In large networks, multiple-trunk interconnections and inter-user circuits are available. The Switching Systems in Digital Communication not only interconnects users but also determines the best and quickest routing to be used for connecting one particular user to a second one, in a manner identical to that described for telephone exchanges. Most data interchange utilizes public telephone networks, the switching being accomplished by telephone switching equipment.

It will be seen that processor-controlled switches are beginning to predominate in advanced countries, to the great benefit of switched data systems. Being microprocessor-based and therefore “smart,” the electronic switching system can provide services such as redial if busy, automatic dial forward, conferencing, and “camp-on” if busy.