The performance characteristics of a dc machine are greatly influenced by the way in which the field winding is excited with direct current. There are two Methods of Excitation of a dc machine. 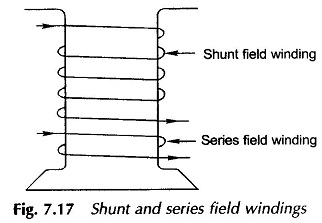 Excellent and versatile ways of controlling the shunt and series excitations are now possible by use of solid-state devices and associated control circuitry.

Another way of classifying machine excitation, which is meaningful for dc machines used as a generator, is to distinguish whether the machine field is excited by its own armature voltage/current or an independent source is used for this purpose. The two distinct classes of machine excitation from this point of view are:

A dc machine when used as a motor has its shunt field always separately excited as its excitation is drawn from the dc supply. Figures 7.18(b) and (c) are valid shunt and series excitation schemes for dc motors.

Of course, now with the advent of solid-state control for both armature and field circuits, this method has lost much of its charm. The differential compound machine has hardly any practical applications. In fact differentially compounded motor can become unstable (acquires dangerously high speeds) in a certain region of operation (at even moderate overloads) (see Sec. 7.12).

From the viewpoint of connections, a dc compound machine may have short-shunt (Fig. 7.18(g)) or a long-shunt (Fig. 7.18(f)) connection. These are two possible ways of connecting the shunt field winding in a compound machine. But there is no appreciable difference in their machine performance characteristics. The choice between them depends on mechanical considerations or reversing switches.