Power system operation considered so far was under conditions of steady load. However, both active and reactive power demands are never steady and they continually change with the rising or falling trend. Steam input to turbo­ generators (or water input to hydro-generators) must, therefore, be continuously regulated to match the active power demand, failing which the machine speed will vary with consequent change in frequency which may be highly undesirable (maximum permissible change in power frequency is ± 0.5 Hz). Also the turbo generator excitation system must be continuously regulated to match the reactive power demand with reactive generation, otherwise the voltages at various system buses may go beyond the prescribed limits. In modern large interconnected systems, manual regulation is not feasible and therefore automation generation and voltage regulation equipment is installed on each generator. Figure 8.1 gives the schematic diagram of Turbo Generator Excitation System and Load Frequency. 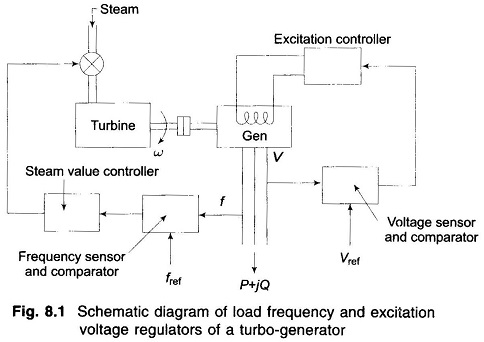 The controllers are set for a particular operating condition and they take care of small changes in load demand without frequency and voltage exceeding the prescribed limits With the passage of time, as the change in load demand becomes large, the controllers must be reset either manually or automatically.

It has been shown in previous chapters that for small changes active power is dependent on internal machine angle δ and is independent of bus voltage; while bus voltage is dependent on machine excitation (therefore on reactive generation Q and is independent of machine angle δ. Change in angle δ is caused by momentary change in generator speed. Therefore, turbo generator excitation system load frequency controls are non-interactive for small changes and can be modelled and analyzed independently.

Change in load demand can be identified as:

The regulators must be designed to be insensitive to fast random changes, otherwise the system will be prone to hunting resulting in excessive wear and tear of rotating machines and control equipment.