The geometry of an Electric Motor Cooling is too complex to predict accurately the heat flow and temperature distribution. This is a difficult task. A portion of the conductors of armature winding are embedded in slots and some portion is outside the iron material as overhang. The heating calculations are also complicated by the loading of the motor. The direction of heat flow does not remain the same at all loaded conditions. At no-load or lightly loaded conditions heat flows from iron parts to the winding due to the temperature gradient. When once the load increases the gradient changes as the heat (loss) generated in the winding is greater than the heat(loss) generated in iron and consequently heat flows from the winding to iron core. A considerable simplification is therefore necessary to compute the temperature rise of a motor.

The heating and Electric Motor Cooling calculation are based on the following simplifications:

2.Heat dissipation taking place is proportional to the difference of temperatures of the body and surrounding medium. No heat is radiated.

3.The rate of dissipation of heat is constant at all temperatures.

W – is the power loss on the motor responsible for heat, Watts.

G – weight of active parts of the motor in kg

A – cooling surface in m2

θ – is temperature rise of the body

Equation (5.2) indicates that the total heat generated in the body (W dt) is equal to the sum of the heat dissipated to the surrounding medium (Aλθ dt) and the heat stored in the body causing a temperature rise θ above the ambient (Gs dθ).

The following results may be obtained by a close examination of Eq. 5.2.

and the maximum temperature rise

Rearranging Eq. 5.2 we have

If the Electric Motor Cooling were not there the machine would heat up enormously and the temperature rise would attain very high values. But θ must be limited to θm. The time taken by the machine to reach this temperature rise in the absence of dissipation can be determined using

which gives a linear relation between θ and t. Therefore

Substituting for θm from Eq. 5.4 we have the value of r1, the time taken by the body to reach the maximum temperature rise

r1 is called the thermal (heating) time constant. In other words this happens to be the time taken by the motor to reach the final steady-state temperature rise if the initial rate of rise of temperature continues.

Heat balance equation (Eq. 5.2) must be solved to obtain a relationship between the temperature rise and time. Rearranging Eq. 5.2 we have

Integrating both sides we have

where log C1 is a constant of integration. It is evaluated using the initial conditions at the start of heating. This equation can be written as

For simplicity, it is assumed that the machine is started from cold. There­fore θ = 0, at t = 0.

Substituting for C1 and rearranging the terms we have 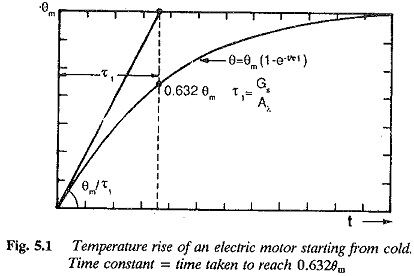 However while considering the heating and Electric Motor Cooling, in many cases the initial temperature rise is not zero, i.e., at t = 0, θ = θ0.

Substituting the initial conditions in Eq. 15.12 we have

The heating curve can be looked upon (Fig. 5.2) as the sum of two curves:

1.heating curve when the machine has a load to give a maximum temper­ature rise of θm.

2.cooling curve when the machine is disconnected from supply with an initial temperature rise of θ0.

Heating time constant r1 : r1 in Eqs 5.16 and 5.21 is called the heating time constant. It can be seen from Eq. 5.5 that it would have been the time taken by the ineffective or had the initial rate of rise of temperature been continued, i.e, 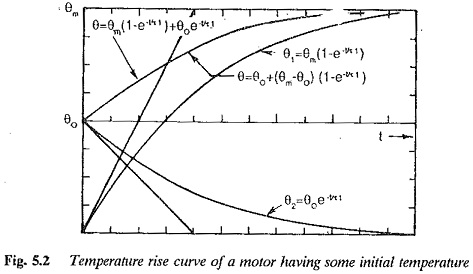 Heating time constant can be determined from the experimental curve using the definition that it is the time taken to reach the 63.2% of θm. The The time constant

When a machine is switched off from the mains or when the load on the motor is reduced, the machine cools. In the first case it cools to the ambient temperature and in the second case it cools to a temperature determined by the power losses at reduced load. The cooling curve is also an exponential curve. When the machine is switched off there is no heat generation in the motor and all the heat stored in the machine is now dissipated to the surroundings. In this Eq. 5.2 reduces to

Where r2 is the time constant during cooling. Fig. 5.3 depicts the curve.

where W1 is the total loss at reduced load. The cooling curve in this case determined as

which can also be written as 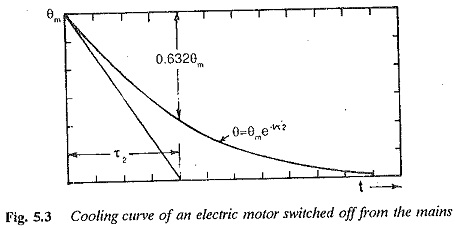 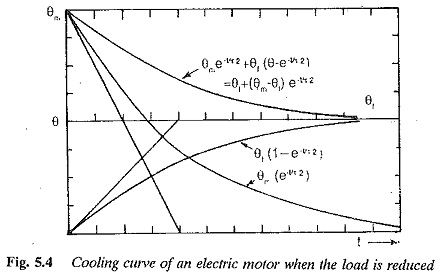 The cooling curve is shown in Fig. 5.4. This may also be looked upon as the sum of two curves

1.heating curve as if the machine is loaded to give a maximum temperature rise of θf.

2.cooling curve as if the machine is disconnected from the supply when it had a temperature rise of θm.

The power rating of a motor for a particular operating condition is selected based on the thermal rating of the motor, so that it meets the specification regarding the final steady-state temperature rise, i.e., it must be equal to or slightly less than the permissible temperature rise.

As has already been pointed out, an Electric Motor Cooling has a very good overload capacity. The Duration of overload is normally till the motor reaches the permissible temperature rise. This overload must be within pull-out torque capability of the motor.

A motor can therefore be selected for a given class of duty based on its thermal rating with due consideration to pull-out torque capability.