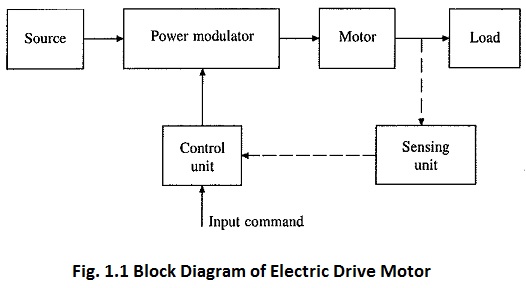 Block diagram of an Electric Drive Motor is shown in Fig 1.1. Load is usually a machinery designed to accomplish a given task, e.g. fans, pumps, robots, washing machines, machine tools, trains and drills. Usually load requirements can be specified in terms of speed and torque demands. A motor having speed-torque characteristics and capabilities compatible to the load requirements is chosen.

Power modulator performs one or more of the following four functions:

When power modulator is employed mainly to perform function (iii), it is more appropriately called converter. While (iii) is the main function, depending on its circuit, a converter may also perform other functions of power modulator.

Controls for power modulator are built in control unit which usually operates at much lower voltage and power levels. In addition to operating the power modulator as desired, it may also generate commands for the protection of power modulator and motor. Input command signal, which adjusts the operating point of the drive, forms an input to the control unit. Sensing of certain drive parameters, such as motor current and speed, may be required either for protection or for closed loop operation.

Electrical Drives are widely used because of the following advantages: