Controlled slowing or stopping of a motor and its driven load is as important as starting in many applications (e.g. cranes, traction on a slope to avoid excessive speed, etc.). Braking of DC Motors methods based on friction, electromechanical action, eddy-currents, etc. are independent of the motor but sometimes electric braking is better justified owing to its greater economy and absence of brake wear. The dc motor is still being widely used for traction purposes. One of the main reasons for this is its excellent braking characteristics and ability of smooth transition from the motor to the generator mode and vice versa. During the braking period, the motor is operated as a generator and the kinetic or gravitational potential energy (cranes or hoists) is dissipated in resistors (plugging) or returned to the supply (regenerative braking).

There are three types of braking in dc motor:

These types of Braking of DC Motors will be discussed here briefly.

This involves the sudden reversal of the connections of either the field or armature winding during motor operation. A strong braking torque is achieved by maintaining the supply voltage to the armature with connections reversed (Fig. 7.63). The effective armature voltage (Ea + V) is initially ≈ 2V, so that a limiting braking resistor (may be a starting resistor) must be brought into the circuit. The kinetic energy of the moving system is dissipated in the armature and braking resistances. 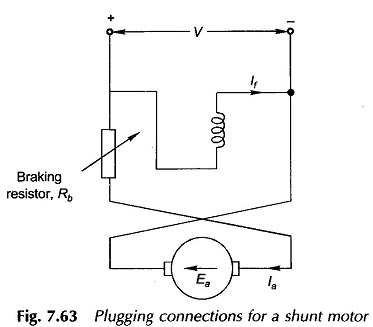 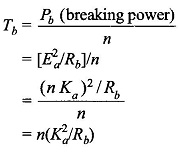 The supply must be switched off close to zero speed (unless the intention is to run the motor in the reverse direction), using a current or speed directional relay and applying back-up mechanical or hydraulic brakes to bring the motor to a halt. The large initial current and the resultant high mechanical stress restrict the application of plugging to small motors only.

The armature is disconnected from the supply and then a braking resistor Rb is immediately connected across it (Fig. 7.64). The motor acts as a generator, driven by the stored kinetic energy dissipating power in Rb. This is a simple method of bringing a motor nearly to a standstill. The braking time is a function of the system inertia, load torque and motor rating. The field circuit is left connected to the supply. The only danger is that if the supply fails, braking also fails. If the field is left connected across the armature, then initially the braking torque is the same but starts falling sharply with speed, and the problem arises once the speed falls below the critical value for self-excitation. For a series motor, it is necessary for braking to reverse either the field or the field armature winding connections for build-up of the armature emf. The value of Rb should be such that (Rb + Ra + Rse) is less than the critical resistance for the speed at which the braking is commenced.

In this method of Braking of DC Motors, most of the braking energy is returned to the supply and is used specially where the duty cycle requires the braking or slowing of the machine more frequently and is most useful in holding a descending load of high potential energy at a constant speed. The condition for regeneration is that the rotational emf is more than the applied voltage so that the current is reversed and the mode of operation changes from motoring to generating.

Regeneration is possible with a shunt and separately excited motors and with compound motors with weak series compounding. Series motors need a reversal of either the field or the armature connections. This is achieved by increasing the field current or armature speed or reducing the supply voltage. It has been shown in literature that about 35% of the energy put into an automotive vehicle during typical urban traction is theoretically recoverable by regenerative braking. How-ever, the exact value of the recoverable energy is a function of the type of driving, the terrain, the efficiency of the drive train, gear ratios in the drive/train, etc. The method needs a supply capable of accepting the generated power without undue rise of the terminal voltage.