Data Communication Circuit using Modem – The name modem is a contraction of the term MOdulator and DEModulator. As the name implies, both functions are included in a modem. When used in the transmitting mode, the modem accepts digital data and converts it to analog signals for use in modulating a carrier signal. At the receive end of the system, the carrier is demodu­lated to recover the data.

Modems are placed at both ends of the communications circuit, as shown in Figure 14-33.

Data Communication Circuit using Modem are described in several ways, one distinction between modems being the mode of operation. A data set which provides transmission in only one direction is referred to as operating in the simplex mode. This type of data set uses only one transmission channel, so that no signaling is available in the direction from the receiver to the transmitter. This is an economical method of data transfer, but it is very limited in its application. It clearly does not accommodate error correction and requests for retransmission.

Some Data Communication Circuit using Modem provide for data transfer in both directions, but the data flow takes turns, with flow in one direction at one time and in the opposite direction at a second time. This type of modem operation is referred to as half-duplex. It requires, only one transmission channel, but the channel must be bidirectional. Some economies result from half-duplex operation, but speed of transmission is reduced because of the necessity of sharing the same circuit and waiting while the transmission circuit components accomplish turnaround.

Modems differ according to the method of interfacing with the communications circuits. If the circuit is a short and dedicated line, a limited distance modem can be used. This type of modem can be relatively simple in its circuitry since it does not have to drive a line which utilizes switching systems and line control devices such as echo suppressors.

The majority of data circuits utilize telephone channels provided by public carriers. These channels generally pass through switching facilities and are provided with equipment designed to enhance the use of the channel for voice applications. This type of equipment is not designed specifically for data transmission, so that the modems must be designed to compensate for any inadequacies of the voice-grade channel. Two broad types of modems are available for this type of service, the hard-wired modem and the acoustically coupled data set.

A hard-wired modem connects directly to the communication circuit in a semi­permanent way. Such modems may be self-contained devices which connect to terminals and business machines, or they may be incorporated in the business machine. Connected to the communications circuit at all times, the hard-wired units can be polled (automatically contacted by the computer) and interrogated at any time. If associated with proper business machines and computers, these modems can send and receive data without human intervention. The one limitation of the hard-wired modem is that it precludes mobility since, being hard-wired, the equipment must remain connected to the circuit terminals.

The acoustically coupled modem solves the mobility problem. A standard telephone handset can be placed in the foam cups of an acoustic coupler, and the transmitter and receiver sounds will be conveyed to and from the telephone channel by transmit and receive elements of the acoustic coupler. The Data Communication Circuit using Modem components of the acoustic coupler form an interface with the business machine. Using this device, a person is able to interconnect with any computer system which has dial-up interconnect capabil­ity. Acoustic couplers are often built into briefcase-sized units which include a typewriterlike terminal and a printer, providing the ability to access and manipulate data from any telephone. The portability and ease of connection afforded by the acoustic coupler are obtained at the expense of other capabilities. Since standard telephone circuits are typically used, speed of transmission is limited. The ability to have the system “on line” continuously is obviously not possible.

Data Communication Circuit using Modem are generally classified according to the important characteristic of transmission speed as follows:

All of the above modems can operate within a single 300- to 3400-Hz (4-kHz) telephone channel. As speed increases beyond approximately 19,000 bps, a wideband modem is needed, as is a wideband channel. Wideband circuits are available generally in multiples of 4-kHz circuits, but the cost is significantly greater than for voice-grade circuits.

Data Communication Circuit using Modem utilize various types of modulation methods, the most common being frequency-shift keying (FSK), which shifts a carrier frequency to indicate a mark or a space. Encoded data can be transferred through communication systems designed for voice transmission because the frequency shifting is limited to the 4-kHz bandwidth of the voice-grade channel. The FSK signal is also analog in nature, enhancing its compatibility with communications circuits. 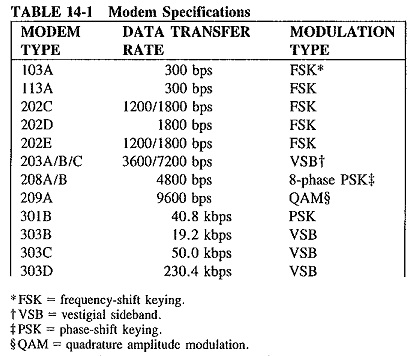 Other types of modulation schemes are used, such as phase-shift-keying (PSK), four-phase PSK and eight-phase PSK, quadrature AM (QAM) and vestigial sideband AM. Table 14-1 lists some of the various types of modems in use in the United States, according to their Bell System designations, showing data transfer rates and modulation methods.