A variation of the radial vane instrument is the concentric vane Repulsion Type Moving Iron Instrument. The instrument has two concentric vanes. One vane is rigidly attached to the coil frame while the other can rotate coaxially inside the stationary vane, as shown in Fig. 2.9. Both vanes are magnetized by the current in the coil to the same polarity, causing the vanes to slip laterally under repulsion. Because the moving vane is attached to a pivoted shaft, this Repulsion Type Moving Iron Instrument results in a rotational force that is a function of the current in the coil. 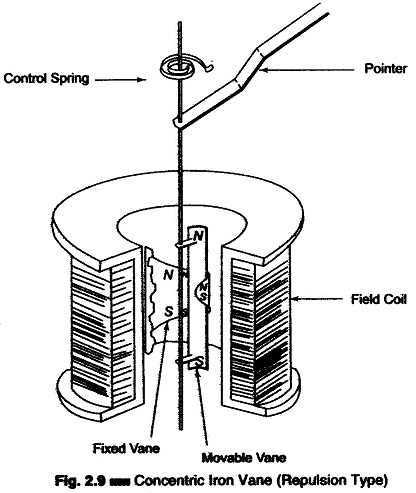 As in other mechanisms the final pointer position is a measure of the coil current. Since this movement, like all iron vane instruments, does not distinguish polarity, the concentric vane may be used on dc and ac, but it is most commonly used for the latter.

Damping is obtained by a light aluminium damping vane, rotating with small clearance in a dosed air chamber. When used on ac, the actual operating torque is pulsating and this may cause vibration of the pointer. Rigid (trussed) pointer construction effectively eliminates such vibration and prevents bending of the pointer on heavy overloads. The concentric vane Repulsion Type Moving Iron Instrument is only moderately sensitive and has square law scale characteristics.

The accuracy of the instrument is limited by several factors:

Similarly, at the higher end of the scale, the knee of the magnetization curve is approached and the peak value of the ac produces less deflection per unit current than the average value, so that the ac reading is lower than the equivalent dc value.

(Hysteresis in iron and eddy currents in the vanes and other metal parts of the instrument further affect the accuracy of the reading.) The flux density is very small even at full scale values of current, so that the instrument has a low current sensitivity. There are no current carrying parts in the moving system, hence the iron vane meter is extremely rugged and reliable. It is not easily damaged even under severe overload conditions.

Adding a suitable multiplier converts the iron vane movement into a voltmeter; adding a shunt produces different current ranges. When an iron vane movement is used as an ac voltmeter, the frequency increases the impedance of the instrument and therefore a lower reading is obtained for a given applied voltage. An iron vane voltmeter should therefore always be calibrated at the frequency at which it is to be used. The usual commercial instrument may be used within its accuracy tolerance from 25-125 Hz.