Moving Iron Instrument can be classified into attraction and repulsion types. Repulsion type instruments are the most commonly used. Iron vane ammeters and voltmeters depend for their operations on the repul­sion that exists between two like magnetic poles.

The movement consists of a stationary coil of many turns which carries the current to be measured. Two iron vanes are placed inside the coil. One vane is rigidly attached to the coil frame, while the other is connected to the instrument shaft which rotates freely. The current through the coil magnetises both the vanes with the same polarity, regardless of the instantaneous direction of cur­rent. The two magnetised vanes experience a repelling force, and since only one vane can move, its displacement is an indicator of the magnitude of the coil current. The repelling force is proportional to the current squared, but the effects of frequency and hysteresis tend to produce a pointer deflection that is not linear and that does not have a perfect square law relationship. 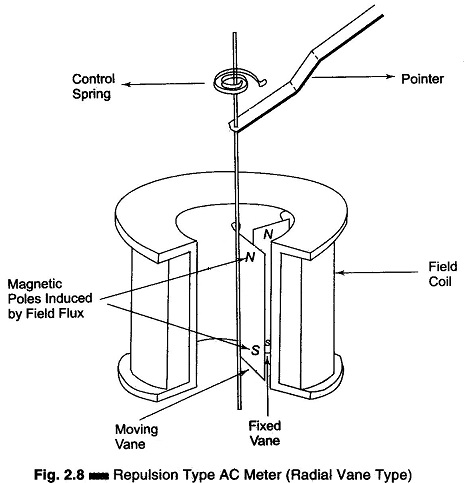 Figure 2.8 shows a radial vane repulsion instrument which is the most sensitive of the Moving Iron mechanisms and has the most linear, scale. One of these like poles is created by the instrument coil and appears as an iron vane, fixed in its position within the coil, as shown in Fig. 2.8. The other like pole is induced on the movable iron piece or vane, which is suspended in the induction field of the coil and to which the needle of the instrument is attached. Since the instrument is used on ac, the magnetic polarity of the coil changes with every half cycle and induces a corresponding amount of repulsion of the movable vane against the spring tension. The deflection of the instrument pointer is therefore always in the same direction, since there is always repulsion between the like poles of the fixed and the movable vane, even though the current in the inducing coil alternates.

The deflection of the pointer thus produced is effectively proportional to the actual current through the instrument. It can therefore be calibrated directly in amperes and volts.

The calibrations of a given instrument will however only be accurate for the ac frequency for which it is designed, because the impedance will be different at a new frequency.

The Moving coil or repulsion type of instrument is usually calibrated to read the effective value of amperes and volts, and is used primarily for rugged and inexpensive meters.

The iron vane or radial type is forced to turn within the fixed current carrying coil by the repulsion between like poles. The aluminium vanes, attached to the lower end of the pointer, acts as a damping vane, in its close fitting chamber, to bring the pointer quickly to rest.