Components of Load Torques Tl can be further divided into following components:

Friction will be present at the motor shaft and also in various parts of the load. TF is equivalent value of various friction torques referred to the motor shaft.

When a motor runs, wind generates a torque opposing the motion. This is known as windage torque.

(iii) Torque required to do the useful mechanical work, TL:

Nature of this Components of Load Torques depends on particular application. It may be constant and independent of speed; it may be some function of speed; it may depend on the position or path followed by load; it may be time invariant or time-variant; it may vary cyclically and its nature may also change with the load’s mode of operation. 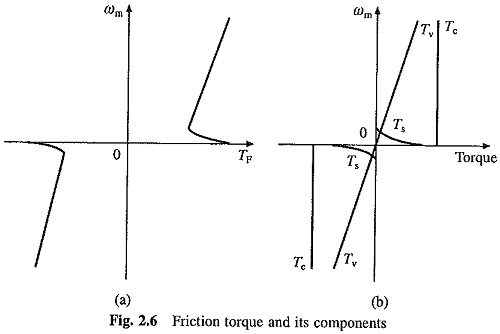 Variation of friction torque with speed is shown in Fig. 2.6(a). Its value at standstill is much higher than its value slightly above zero speed. Friction at zero speed is called stiction or static friction. In order for drive to start, the motor torque should at least exceed stiction. Friction torque can be resolved into three components (see Fig. 2.6(b)). Component Tv which varies linearly with speed is called viscous friction and is given by:

where B is the viscous friction coefficient.

Another component Tc, which is independent of speed, is known as Coulomb friction. Third component Ts accounts for additional torque present at standstill. Since Ts is present only at standstill it is not taken into account in the dynamic analysis.

Windage torque Tw, which is proportional to speed squared, is given by

where C is a constant.

From the above discussion, for finite speeds,

If there is a torsional elasticity in shaft coupling the load to the motor, an additional Components of Load Torques, known as Coupling Torque, will be present. Coupling torque (Te) is given by

where θe is the torsion angle of coupling (radians) and Ke the rotational stiffness of the shaft (N­m/rad).

In most applications, shaft can be assumed to be perfectly stiff and coupling torque Te can be neglected. Its presence in appreciable magnitude has adverse effects on motor. There is potential energy associated with coupling torque and kinetic energy with the dynamic torque. Exchange of energy between these two energy storage’s tends to produce oscillations which are damped by viscous friction torque Bωm. When B is small, oscillations occur producing noise. Further, shaft may also break when the drive is started.