In chemical vapour deposition (CVD), the film is formed on the surface of the substrate by thermal decomposition and or the reaction of various gaseous compounds. As in CVD, the epitaxial layer is formed from the gaseous vapour phase, hence it is called Vapour Phase Epitaxy.

The process of chemical vapour deposition growth takes place in the reaction chamber in which a long quartz tabe with RF induction coil wound on it. The silicon wafers are placed in the graphite rod which acts as base. It is also called graphite susceptor which supports the wafer. Then the suscepter is heated by RF induction to temperature between 1100∘C to 1300∘C.

The temperature for SiCl4 reaction is controlled between 1150 to 1250∘C and respectively lower temperatures for remaining vapours. The different gases required for Epitaxial layer formation are allowed in the chamber through different channels. 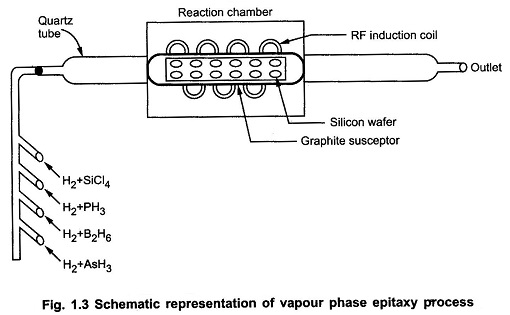 This doping is done by using hydrides of arsenic, boron, phosphorus. These are Arsine (A5H3), diborane (B2H6) and phosphine (PH3). In general, the film grows at 1 μm/min typically.

Now a days, instead of RF induction, heating with quartz halogen lamps is preferred as it provides more uniform heating. The doping capability of an epitaxial layer lies in the range 1012 to 1022 atoms/cm3.