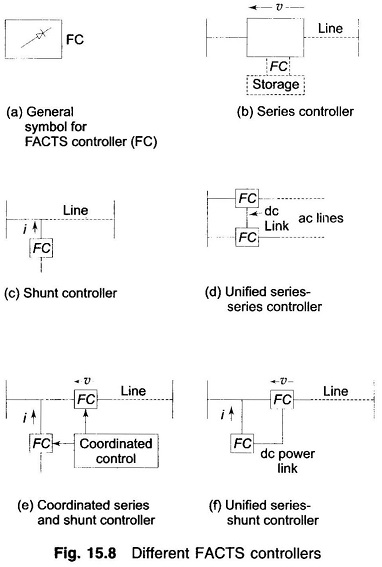 Storage source such as a capacitor, battery, superconducting magnet, or any other source of energy can be added in parallel through an electronic interface to replenish the converter’s dc storage as shown dotted in Fig. 15.8 (b). A controller with storage is much more effective for controlling the system dynamics than the corresponding controller without storage. 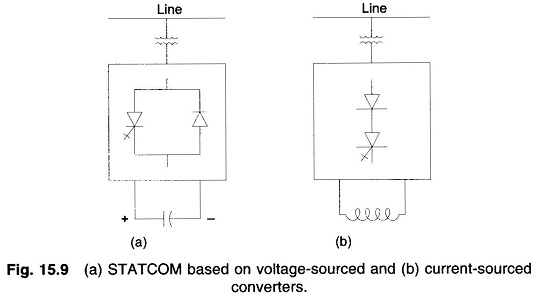 A combination of STATCOM and any energy source to supply or absorb power is called static synchronous generator (SSG). Energy source may be a battery, flywheel, superconducting magnet, large dc storage capacitor, another rectifier/inverter etc.

It is a series connected controller. Though it is like STATCOM, but its output voltage is in series with the line. It thus controls the voltage across the line and hence its impedance.

This is a recently introduced controller. It is a combination of two or more static synchronous series compensators which are coupled via a common dc link to facilitate bi-directional flow of real power between the ac terminals of the SSSCs, and are controlled to provide independent reactive series compensation for the control of real power flow in each line and maintain the desired distribution of reactive power flow among the lines. Thus it manages a comprehensive overall real and reactive power management for a multi-line transmission system.

This controller is connected as shown in Fig. 15.10. It is a combination of STATCOM and SSSC which are coupled via a common dc link to allow bi-directional flow of real power between the series output terminals of the SSSC and the shunt output terminals of the STATCOM. These are controlled to provide concurrent real and reactive series line compensation without an external energy source. The UPFC, by means of angularly unconstrained series voltage injection, is able to control, concurrently/simultaneously or selectively, the transmission line voltage, impedance, and angle or, alternatively, the real and reactive line flows. The UPFC may also provide independently controllable shunt reactive compensation. 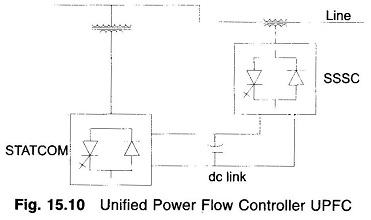 A thyristor controlled transformer which can provide variable in-phase voltage with continuous control.

It is a shunt-connected thyristor-switched resistor, which is controlled to aid stabilization of a power system or to minimise power acceleration of a generating unit during a disturbance.

A thyristor-switched metal-oxide varistor (MOV) used to limit the voltage across its terminals during transient conditions.

It may be noted that normally HVDC and FACTS are complementary technologies. The role of HVDC, for economic reasons, is to interconnect ac systems where a reliable ac interconnection would be too expensive. HVDC transmission as well as back-to-back HVDC system can improve transient stability and control line flows. Voltage source converter based (self-commutated) HVDC system may have the same features as those of STATCOM or UPFC. This system also regulates voltage and provides system damping.

A comparative performance of major types of facts Controllers in ac system is given in Table 15.2.