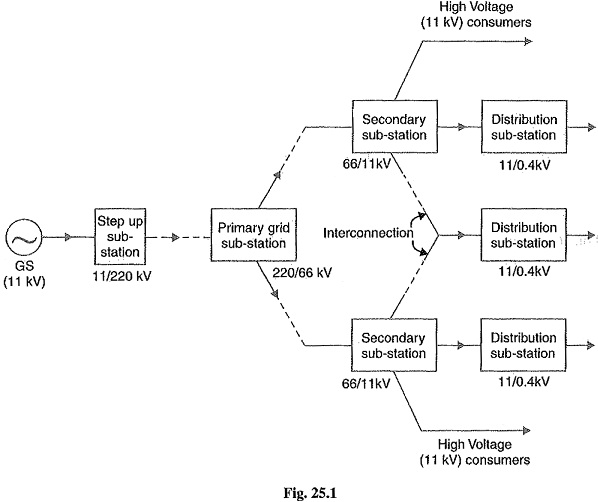 1. Step-up sub-station: The generation voltage (11 kV in this case) is stepped up to high voltage (220 kV) to affect economy in transmission of electric power. The sub-stations which ac­complish this job are called step-up sub-stations. These are generally located in the power houses and are of outdoor type.

4. Distribution sub-station: The electric power from 11 kV lines is delivered to distribution sub-stations. These sub-stations are located near the consumers localities and step down the voltage to 400 V, 3-phase, 4-wire for supplying to the consumers. The voltage between any two phases is 400V and between any phase and neutral it is 230 V. The single phase residential lighting load is connected between any one phase and neutral whereas 3-phase, 400V motor load is connected across 3-phase lines directly. It may be worthwhile to mention here that majority of the distribution sub­stations are of pole-mounted type.

It is a distribution sub-station placed overhead on a’ pole. It is the cheapest form of sub-station as it does not involve any building work. Fig 25.2 (i) shows the layout of pole-mounted sub-station whereas Fig. 25.2 (ii) shows the schematic connections. The transformer and other equipment are mounted on H-type pole (or 4-pole structure). 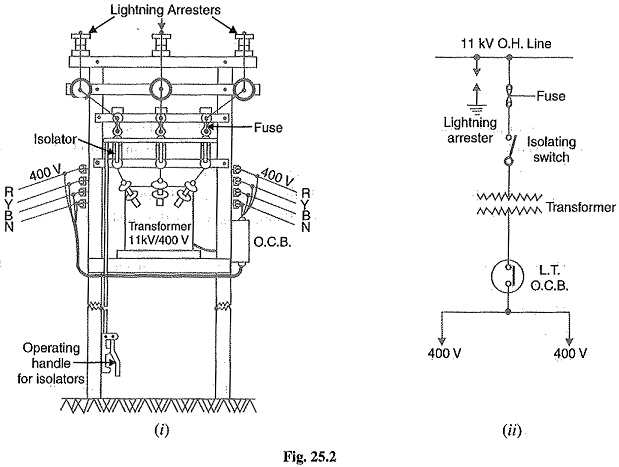 The 11 kV line is connected to the transformer (11kV / 400 V) through gang isolator and fuses. The lightning arrest­ers are installed on the H.T. side to protect the sub-station from lightning strokes. The transformer steps down the volt­age to 400V, 3-phase, 4-wire supply. The voltage between any two lines is 400V whereas the voltage betw,een any line and neutral is 230 V. The oil circuit breaker (O.C.B.) installed on the L.T. side automatically isolates the transformer from the consumers in the event of any fault. The pole-mounted sub-stations are generally used for transformer capacity upto 200 kVA. The following points may be noted about pole-mounted sub-stations : 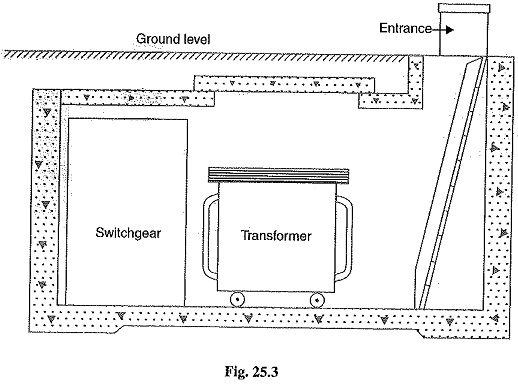