The block diagram of Figure 6-2 shows a basic superheterodyne receiver. There are slightly different versions, but they are logical modifications of Figure 6-2. In the superheterodyne receiver, the incoming signal voltage is combined with a signal generated in the receiver. This local oscillator voltage is normally converted into a signal of a lower fixed frequency. The signal at this intermediate frequency contains the same modulation as the original carrier, and it is now amplified and detected to reproduce the original information. The superhet has the same essential components as the TRF receiver, in addition to the mixer, local oscillator and intermediate-frequency (IF) amplifier. 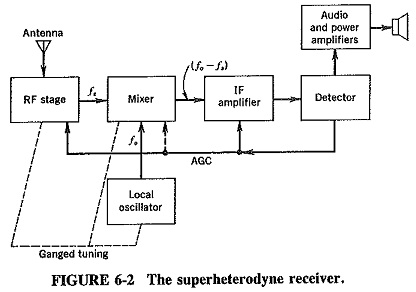 A constant frequency difference is maintained between the local oscillator and the RF circuits; normally through capacitance tuning, in which all the capacitors are ganged together and operated in unison by one control knob. The IF amplifier generally uses two or three transformers, each consisting of a pair of mutually coupled tuned circuits. With this large number of double-tuned circuits operating at a constant, specially chosen frequency, the IF amplifier provides most of the gain (and therefore sensitivity) and bandwidth requirements of the receiver. Since the characteristics of the IF amplifier are independent of the frequency to which the receiver is tuned, the selectivity and sensitivity of the superhet are usually fairly uniform throughout its tuning range and not subject to the variations that affect the TRF receiver. The RF circuits are now used mainly to select the wanted frequency, to reject interference such as the image frequency and (especially at high frequencies) to reduce the noise figure of the receiver.

For further explanation of the superheterodyne receiver, refer to Figure 6-2. The RF stage is normally a wideband RF amplifier tunable from approximately 540 kHz to 1650 kHz (standard commercial AM band). It is mechanically tied to the local oscillator to ensure precise tuning characteristics.

The local oscillator is a variable oscillator capable of generating a signal from 0.995 MHz to 2.105 MHz. The incoming signal from the transmitter is selected and amplified by the RF stage. It is then combined (mixed) with a predetermined local oscillator signal in the mixer stage. (During this stage, a class C nonlinear device processes the signals, producing the sum, difference, and originals.)

The signal from the mixer is then supplied to the IF (intermediate-frequency) amplifier. This amplifier is a very-narrow-bandwidth class A device capable of selecting a frequency of 0.455 kHz ± 3 kHz and rejecting all others.

The IF signal output is an amplified composite of the modulated RF from the transmitter in combination with RF from the local oscillator. Neither of these signals is usable without further processing. The next process is in the detector stage, which eliminates one of the sidebands still present and separates the RF from the audio components of the other sideband. The RF is filtered to ground, and audio is supplied or fed to the audio stages for amplification and then to the speakers, etc.

Because of its narrow bandwidth, the IF amplifier rejects all other frequencies but 455 kHz. This rejection process reduces the risk of interference from other stations. This selection process is the key to the superheterodyne’s exceptional performance, which is why it is widely accepted The process of tuning the local oscillator to a predetermined frequency for each station throughout the AM band is known as tracking.

A simplified form of the superheterodyne receiver is also in existence, in which the mixer output is in fact audio. Such a direct conversion receiver has been used by amateurs, with good results.

The advantages of the superheterodyne receiver make it the most suitable type for the great majority of radio receiver applications; AM, FM, communications, single-sideband, television and even radar receivers all use it, with only slight modifications in principle.