A chopper can also be used for stepping up or down the supply voltage by varying its duty cycle. The principle of operation is illustrated in Fig. 27.29. As shown, the output voltage polarity is opposite to that of input voltage V. 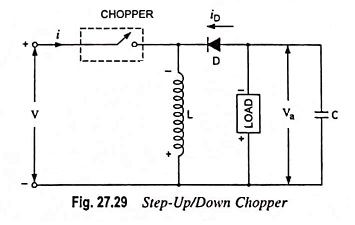 But the average current through the inductor, as in case of step-up chopper discussed in previous topic is

During off period Toff, the energy released by inductor to the load is

Under steady-state condition, assuming no loss of power.

Substituting Ton/T = α in above equation, we have