Rather than arranging a separate dc source for excitation purposes, practical generators are always excited from their own armature terminals, this method of excitation being known as Self Excitation. A Self Excitation generator with connection as shown in Fig. 7.24 is known as a shunt generator by virtue of the parallel connection of the field winding with the armature. 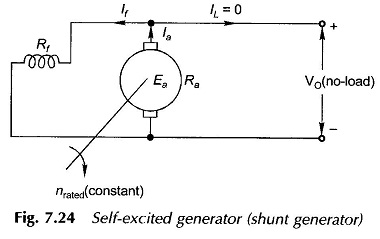 Assume that the field is introduced into the circuit after the armature has been brought to rated speed. At the instant of switching on the field, the armature voltage corresponds to a small residual value which causes a small field current to flow. If the field is connected such that this current increases the field mmf and therefore the induced emf, the machine will continuously build-up. This indeed is a positive feedback connection and the machine builds up to a fine steady value only because of the saturation characteristic of the machine’s magnetic circuit.

Since the generator is assumed to be on no-load during the build-up process, the following circuit relationships apply (Fig. 7.24).

The field current in a shunt generator being very small, the voltage drop /fRa can be neglected so that

which is a straight line relationship, called the Rf-line, in V-/f plot of Fig. 7.25. 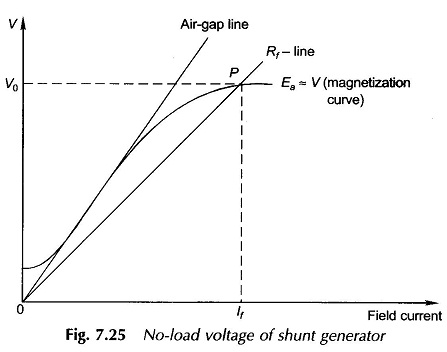 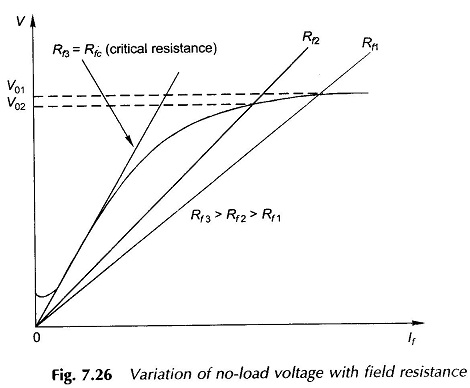 Consider now the operation with fixed Rf and variable armature speed. It is observed from Fig. 7.27 that as the speed is reduced the OCC proportionally slides downwards so that the no-load voltage reduces. At a particular speed, called the critical speed, the OCC is tangential to the Rf -line and as a result the generator would fail to excite.

To summarize, a dc shunt generator may fail to self-excite for any of the three reasons mentioned below: 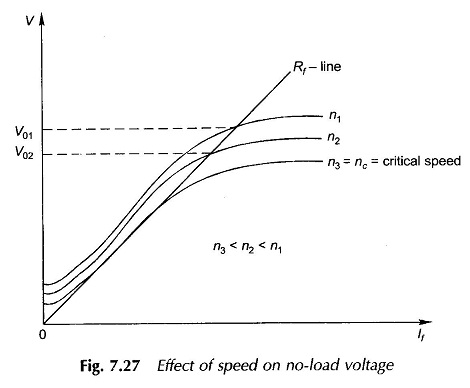