Security Analysis – System security can be broken down into two major functions that are carried out in an operations control centre:

(i) security assessment, and

The security functions in an EMS can be executed in ‘real time’ and ‘study’ modes. Real time application functions have a particular need for computing speed and reliability.

The static security level of a power system is characterised by the presence or otherwise of emergency operating conditions (limit violations) in its actual (pre-contingency) or potential (post-contingency) operating states. System security assessment is the process by which any such violations are detected.

(i) system monitoring and

System monitoring provides the operator of the power system with pertinent up-to-date information on the current conditions of the power system. In its simplest form, this just detects violations in the actual system operating state. Contingency analysis is much 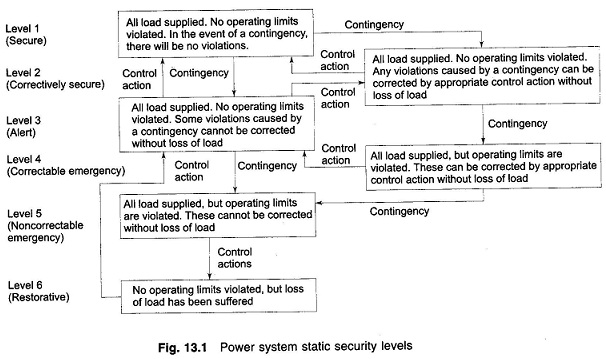 more demanding and normally performed in three distinct states, i.e. contin­gency definition, selection and evaluation. Contingency definition gives the list of contingencies to be processed whose probability of occurrence is high. This list, which is usually large, is in terms of network changes, i.e. branch and/or injection outages. These contingencies are ranked in rough order of severity employing contingency selection algorithms to shorten the list Limited accuracy results are required, therefore an approximate (linear) system model is utilized for speed. Contingency evaluation is then performed (using AC power flow) on the successive individual cases in decreasing order of severity. The evaluation process is continued up to the point where no post-contingency violations are encountered. Hence, the purpose of contingency analysis is to identify the list of contingencies that, if occur, would create violations in system operating states. They are ranked in order of severity.

The power system limits of most interest in contingency analysis are those on line flows and bus voltages. Since these are soft limits, limited-accuracy models and solutions are justified. The most fundamental approximate load flow model is the NR model.

The DC load flow model in its incremental version is normally preferred.

This model assumes voltages to remain constant after contingencies. However, this is not true for weak systems. The utility has to prespecify whether it wants to monitor post-contingency “steady-state” conditions imme­diately after the outage (system intertial response) or after the automatic controls. (governor, AGC, ED) have responded. Depending upon this decision, different participation factors are used to allocate the MW generation among the remaining units. The reactive problem tends to be more non-linear and voltages are also influenced by active power flows.

FDLF (Chapter 6) is normally the best for this purpose since its Jacobian matrix is constant and single-line outages can be modelled using the matrix inversion lemma.

The model often used is

There are two main approaches:

These involve screening and direct ranking of contingency cases. They monitor the appropriate post-contingent quantities (flows, voltages). The severity measure is often a performance index.

These give the values of the contingency case severity indices for ranking, without calculating the monitored contingent quantities directly.

Simulation of line outage is more complex than a generator outage, since line outage results in a change in system configurations. The Inverse Matrix Modification Lemma (IMML) or ‘compensation’ method is used throughout the contingency analysis field [12]. The IMML helps in calculating the effects of network changes due to contingencies, without reconstructing and refactorizing or inverting the base case network matrix. It is also possible to achieve computational economy by getting only local solutions by calculating the inverse elements in the vicinity of the contingencies. The question is how far one should go. Some form of sensitivity analysis may be used.

The problem of studying hundreds of possible outages becomes very difficult to solve if it is desired to present the results quickly so that corrective actions can be taken. One of the simplest ways of obtaining a quick calculation of possible overloads is to use network sensitivity factors. These factors show the approximate change in line flows for changes in generation on the network configuration and are derived from the DC load flow [1]. They are of two types:

These are discussed in detail in the next section.

In a practical situation when a contingency causing emergency occurs, control action to alleviate limit violations is always taken, if such a capability exists and a protective system permits time to do so.

The security control function (which is normally achieved by SCO) responds to each insecure contingency case (as obtained by contingency analysis), usually in decreasing order of severity by:

A specific security control function, then, is designed to

Only a small proportion of work on optimal power flow (OPF) has taken into account the security constraints. The most successful applications have been to the security constrained MW dispatch OPF sub-problem. The contingency-constrained voltage/var rescheduling problem, as of the writing of this text, still remains to be solved to a satisfactory degree.