From earlier section, it is shown that for a negative feedback amplifier, the high cutoff frequency occurs when the amplifier open-loop gain approximately equals the circuit closed-loop gain: 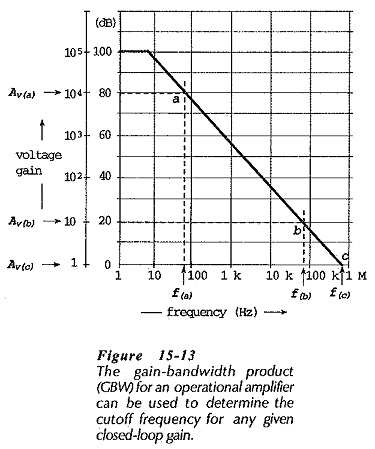 The gain-bandwidth produce (GBW), or unity-gain bandwidth, of an operational amplifier is the open-loop gain at a given frequency multiplied by the frequency. Referring to the Av/f response for the 741 reproduced in Fig. 15-13, it is seen that at Av(a) = 104, the frequency is f(a) ≈ 80 Hz. Thus,

It is important to note that Eq. 15-2 applies only to operational amplifiers that have a gain/frequency response that falls off to the unity-gain frequency at 20 dB/decade. Where the Av/f response falls off at some other rate, Eq. 15-2 cannot be used.

The Av/f response graphs, upper cutoff frequencies, and GBW specified on op-amp data sheets normally refer to the operational amplifier performance as a small-signal amplifier. In this case, the measurements are usually made for output amplitudes not exceeding 100 mV peak-to-peak. Where an amplifier circuit has to produce a large output voltage, the op-amp full-power bandwidth (fp) must be used. The AD843 operational amplifier, for example, is specified as having a typical unity gain bandwidth of 34 MHz for an output amplitude of 90 mV p-to-p, and a typical full power bandwidth of 3.9 MHz when the output amplitude is 20 V p-to-p. 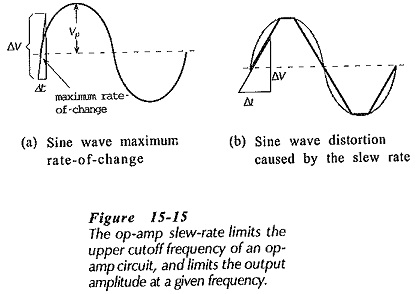 The op-amp slew rate (SR) can be used to calculate the full-power bandwidth for a given output amplitude. For a sinusoidal voltage waveform, the fastest rate-of-change of voltage occurs at the point where the waveform crosses from its negative half-cycle to its positive half-cycle, and vice versa. This is illustrated in Fig. 15-15(a). It can be shown that the voltage rate­-of-change at this point is,

The maximum rate-of-change of the waveform is limited by the maximum slew rate of the op-amp used. Where the waveform amplitude or frequency is higher than the limits imposed by the slew rate, distortion will occur as illustrated in Fig. 15-15(b).

The SR can be equated to the sine wave rate-of-change,

where fp  is the slew-rate limited frequency, or full-power bandwidth, and Vp is the peak level of the circuit output voltage. Equation 15-3 can be used to determine the full-power bandwidth of an op-amp circuit for a given output voltage amplitude. Sometimes Eq. 15-3 gives an fp value greater than that determined from the Av/f graph or the GBW product. In these cases, the circuit Op Amp Circuit Bandwidth and Slew Rate Test is still dictated by the Av/f graph or the GBW product.