The bandwidth of any system is the range of frequencies for which the current or output voltage is equal to 70.7% of its value at the resonant frequency, and it is denoted by BW. Figure 8.9 shows the response of a series Bandwidth of RLC Circuit. 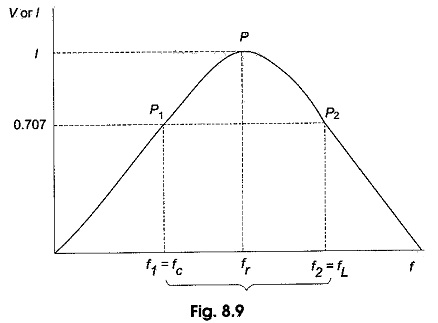 If the current at P1 is 0.707Imax, the impedance of the Bandwidth of RLC Circuit at this point is √2 R, and hence

If we equate both the above equations, we get

If we divide the equation on both sides by fr, we get

Here an important property of a coil is defined. It is the ratio of the reactance of the coil to its resistance. This ratio is defined as the Q of the coil. Q is known as a figure of merit, it is also called quality factor and is an indication of the quality of a coil.

The upper and lower cut-off frequencies are sometimes called the half-power frequencies. At these frequencies the power from the source is half of the power delivered at the resonant frequency.

At resonant frequency, the power is

At frequency f1, the power is

Similarly, at frequency f2, the power is

The response curve in Fig. 8.9 is also called the selectivity curve of the Bandwidth of RLC Circuit. Selectivity indicates how well a resonant circuit responds to a certain frequency and eliminates all other frequencies. The narrower the bandwidth, the greater the selectivity.