In general metallization applications are divided into three groups,

In VLSI, different new Metallization Process schemes for gate, interconnections, ohmic contacts are introduced. But the application of any new metallization scheme is tested in accordance with certain requirements as given below.

The metallization which connects a base (in bipolar transistors) or gate (in MOSFETs) to the neighbouring two regions is called gate metallization.

The metallization which connects number of bipolar devices or MOSFETs is called interconnection metallization.

Metals and Alloys for Metallization:

In most of the IC’s, aluminium is the widely used metal for metallization because

But now a days alongwith aluminium, platinum silicide (Pt Si) has been used as a schottky barrier contact. It may be used as an ohmic contact simply for deep junctions. For high reliable connections to the outside, platinum / titanium / gold beam lead technology is prefered.

Actually no metal satisfies all the desired properties. Eventhough aluminium is most widely used metal, it has certain drawbacks such as :

In MOS devices, polysilicon is generally used for gate metallization. With this metal in contact with gate oxides, devices characteristics and processes are unaltered. To have low resistance at gate and interconnection level, polysilicon is replaced by polysilicon /refractory silicides.

In the production of microprocessors and RAMs, refactor silicides with highest compatibility are used. The common examples are molybdenum (MoSi2), tantalum (TaSi2) and tungston (WSi2) which are all disilicides.

Because of junction spiking, high contact resistance, electromigration resistance, contact failure takes place. The contact problems can be overcome by using (i) Si-Alalloy, polysilicon layers gate and aluminium, (iii) selectively deposited tungston. Some times self aligned silicide such as platinum silicide (PtSi) is used in between silicon and silicide to ensure high metallurgical contact.

When aluminium is used as a top metal there is a possibility of interaction of silicide with aluminium in the 200 to 500° C temperature range. To overcome this, transition metal nitrides, carbides and borides are used as barrier between silicide and aluminium.

Lastly the most important characteristics of a Metallization Process is that it should be good adhesive. From that point of view, the metals, forming oxides, such as Al, Ta, Tl etc are most commonly used. The titanium is the most commonly used metal providing good adherence. The important property of titanium is that it forms a good bond with SiO2 at two temperatures and acts as a glue layer.

The following Table 1.5 gives the list of metals and alloys used for different metallization applications.

The important properties of the metallization are

The resistivity ρ for the pure, thick and single crystalline film is lower ; while for impure and grain boundaries, it is higher. Due to chemical or metallurgical interactions, the resistivity of metallization either increases or decreases.

The Metallization Process takes place in a chamber which is called vacuum evaporation chamber. The chamber pressure is adjusted to the range of 10-6 to 10-7 Torr. The material to be evaporated is placed in a basket. Then using electron gun, high power density electron beam is focused at the surface of the material. Due to this, material starts heating up and vaporizing. These vapours hit substrate and condence there to form a thing film coating. After the metalization process is over, the thin film is patterned to form required interconnections. By using proper etching process, aluminium is removed form unwanted places. 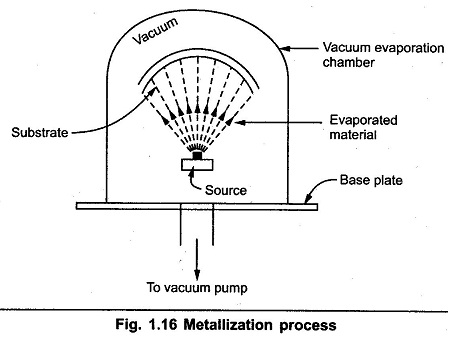 In general, there are two important deposition processes.

This process has number of advantages over other process such as, (i) low temperature process, (ii) high throughput, and (iii) excellent step coverage.

Using chemical vapour deposition technique only Molybdenum and tungston is depositied. This process is carried at low pressure, hence also known as LPCVD. Using laser CVD, selective area deposition or direct writing throughout, both is possible.

There are two types of physical vapour deposition processes namely evaporation and sputtering. In both the processes, first the condensed phase of the solid is converted into gaseous or vapour phase. Then the gaseous phase of the solid is transported to the substrate. And then lastly the gaseous source is condensed on the substrate followed by film growth.

The evaporation method is the simplest method of film deposition by the condensation of a vapour on a substrate. In this method, the temperature of the substrate is maintained lower than that of the vapour. When any metal is heated to sufficiently high temperature, it vapourizes. To heat a metal to high temperature different methods of heating are used such as resistance heating, inductive heating, electron bombardment and laser heating. For aluminium, which is the most common metal used for Metallization Process, any of the methods can be used.

In sputter deposition, unlike evaporation method, energetic ions are bombarded on the target material. Due to this process, some atoms of the target materials are released. These released atoms are then condensed on the substrate. The sputtering deposition process is applicable to any type of materials such as ‘ insulators, semiconductors, metals or alloys. As compared to evaporation process, the sputtering process is well controlled. This is carried at relatively high pressures like 1 Pa.

The metallization is used to, produce rectifying contacts and diffusion barriers between reacting metallic film