A digital process control functionally needs to operate in much the same way as a conventional analog controller. That is, it must provide facilities to raise or lower the set point and to provide proportional, 2-term or 3-term control. It must be capable of operating in one of many modes including, manual, automatic, remote or ratio (in which the controller, or controllers, controls the ratio of two quantities such as air and gas in an air–gas mixture burner). It should accept analog signals from plant mounted transducers and signal conditioners and transmit analog signals to control valves, etc. The processor software must also provide for square root extraction from appropriate plant signals. A block diagram of a typical process controller is shown in Fig. 21.20. 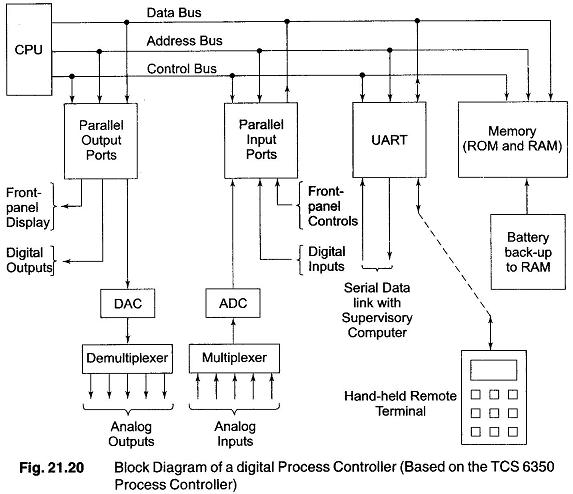 The process controller contains output ports which controls a number of functions as follows. The Digital Process Control has a number of digital displays on its front panel including 7-segment displays, which can be used to display the measured value and/or deviation (although these could be displayed in the form of a bar using light emitting diodes), the front panel display could also indicate the operating mode of the controller. Other digital outputs can be used to provide remote indication of the status of the controller. Yet another output port is associated with a DAC which converts digital data from the microprocessor into analog data used to control the plant, a demux is contained in the controller to permit a number of analog devices to be controlled in this way.

The controller also contains a number of input ports to allow data to be fed to the controller. These data may be obtained from remote switches on the plant or from control buttons on the front panel of the controller. Another input port is associated with an ADC whose inputs are multiplexed so that a number of analog values of process variables can be measured.

The process controller also has its own memory, i.e. it is an intelligent controller, the main operating program being held in ROM while temporary data are stored in RAM. Since the data stored in RAM (e.g. a new value of set point), should not be lost in the event of a power supply failure which can be even for a short period. The RAM has a battery back up so that temporary data will be retained in the event of a power supply failure.