Lithography Process is used to produce a multiple image on the resists which covers the wafer. A lithographic process can be realised with the help of three sub processes given by, 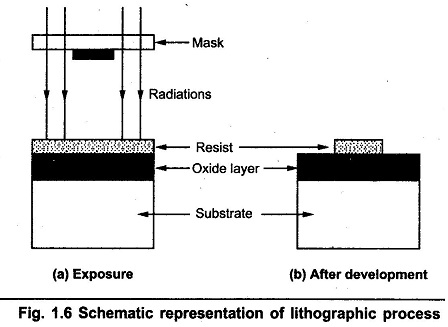 In optical lithography, the images are formed with the help of visible or ultra violet rays using contact printing, proximity printing or projection printing.

The function of lithography is to produce a multiple image on the resist  and the wafer as shown in the Fig. 1.7.

The imaging source is either a mask or reticle  made up of a glass plate with patterned chromium. The main difference between the mask and the reticle is that there are multiple images with actual size on the mask, while a single enlarged image on a reticle. The mask and reticle are produced with e-beam optical method. Firstly the resist is deposited on a glass plate. Then it is exposed to imaging pattern. After exposure the selective part is removed. Finally etching process is employed to obtain patterned chromium layer on the glass.

The photo etching is a process of removing SiO2  from the selective regions so that the desired impurities are diffused. The silicon wafer is coated with a photo resist film, as shown in the Fig. 1.8 (a).

There are two types of the Photo Resists.

The examples of negative and positive photo resists are Kodak microneg 747 and MP-2400, HPR-206 respectively.