Coupling and Bypass Capacitor Effects – Consider the typical BJT Circuit Frequency Response Analysis illustrated in Fig. 8-5. As discussed, the amplifier voltage gain is constant over a middle range of signal frequencies, and it falls at the low and high ends of the frequency range. 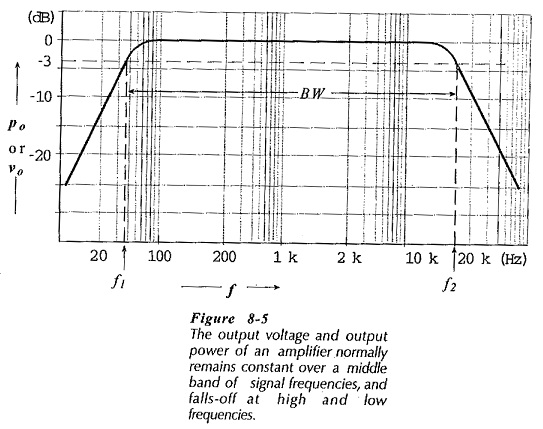 The gain fall-off at low signal frequencies is due to the effect of coupling and bypass capacitors. Recall that the reactance of a capacitor is XC = 1/(2πfC). At medium and high frequencies, the factor f makes XC very small, so that all coupling and bypass capacitors behave as ac short circuits. At low frequencies, XC is large enough to divide the voltages across the capacitors and series resistances, (see Fig. 8-11). As the signal frequency gets lower, the capacitive reactance increases, more of the signal is lost across the capacitors, and the circuit gain continues to fall. 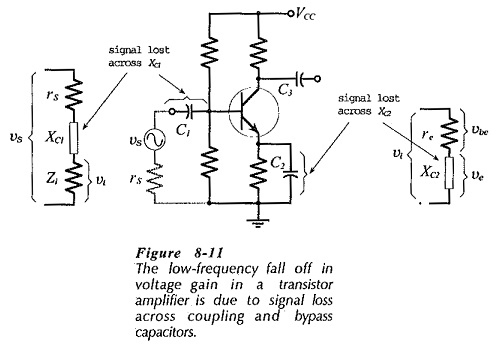 The input capacitance of an amplifier reduces the circuit gain by 3 dB when the capacitive impedance equals the resistance in parallel with the input, (see Fig. 8-12). That is when, 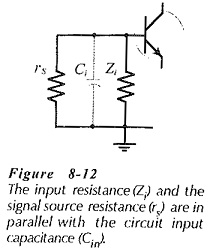 When a BJT Circuit Frequency Response Analysis is used as an emitter follower its BE junction voltage is not significantly altered by the ac input signal, because virtually all of vi appears at the emitter as vo, (see Fig. 8-14). Also, there is no Miller effect to amplify Cbc, so the input capacitance is Cibo||Cobo. The input capacitance limited cutoff frequency for an emitter follower is very much higher than that for a CE circuit. 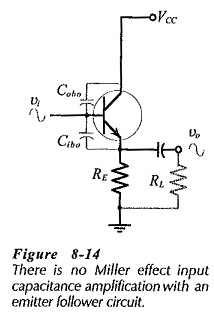 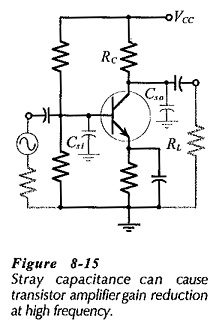 At the circuit output, the impedance of the stray capacitance (Cso) is very high at low and medium signal frequencies, so that it has no effect on the gain. At high frequencies, the stray capacitive impedance becomes small enough to shunt away some of the input and output currents, and thus it reduces the circuit gain. Referring to Fig. 8-15, it is seen that circuit ac load consists of the output stray capacitance (Cso) in parallel with RC and RL. Rewriting the voltage gain equation for CE and CB circuits,

If the voltage gain falls by 3 dB at fαe due to the transistor, and by 3 dB at the same frequency due to the stray capacitance, then the gain is down by 6 dB. Consequently, the amplifier upper cutoff frequency is lower than fαe. This is illustrated in Fig. 8-16.

In some circumstances it is desirable to set the upper cutoff frequency of a circuit at a frequency well below the transistor cutoff frequency, (see Fig. 8-16). This is done simply by connecting a capacitor from the collector terminal to ground exactly as Cso is shown in Fig. 8-15. The capacitance value is calculated at the desired cutoff frequency to give,