When the neutral point of a 3-phase system (e.g. 3-phase generator, 3-phase transformer etc.) is directly connected to earth (i.e. soil) through a wire of negligible resistance and reactance, it is called Solid Grounding or Effective Grounding. 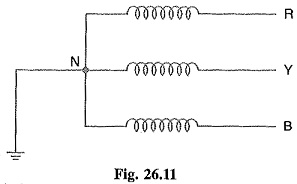 The solid grounding of neutral point has the following advantages :

1. The neutral is effectively held at earth potential.

2.. When earth fault occurs on any phase, the resultant capacitive current IC is in phase oppo­sition to the fault current  IF. The two currents completely cancel each other. Therefore, no arcing ground or over-voltage conditions can occur. Consider a line to ground fault in line B as shown in Fig. 26.12. The capacitive currents flowing in the healthy phases R and Y are IR and Iy respectively. The resultant capacitive current IC is the phasor sum of IR and Iy. In addition to these capacitive currents, the power source also supplies the fault current IF. This fault current will go from fault point to earth, then to neutral point N and back to the fault point through the faulty phase. The path of IC is capacitive and that of IF is inductive. The two currents are in phase opposition and completely cancel each other. Therefore, no arcing ground phenomenon or over-voltage conditions can occur. 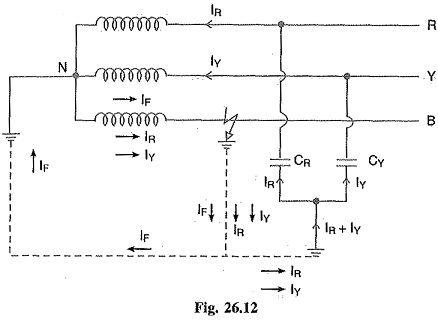 3. When there is an earth fault on any phase of the system, the phase to earth voltage of the faulty phase becomes zero. However, the phase to earth voltages of the remaining two healthy phases remain at normal phase voltage because the potential of the neutral is fixed at earth potential. This permits to insulate the equipment for phase voltage. Therefore, there is a saving in the cost of equipment.

4. It becomes easier to protect the system from earth faults which frequently occur on the When there is an earth fault on any phase of the system, a large fault current flows between the fault point and the grounded neutral. This permits the easy operation of earth-fault relay.

The following are the disadvantages of solid grounding :

1. Since most of the faults on an overhead system are phase to earth faults, the system has to bear a large number of severe shocks. This causes the system to become unstable.

Solid grounding is usually employed where the circuit impedance is sufficiently high so as to keep the earth fault current within safe limits. This system of grounding is used for voltages upto 33 kV with total power capacity not exceeding 5000 kVA.