The process of connecting neutral point of 3-phase system to earth (i.e. soil) either directly or through some circuit element (e.g. resistance, reactance etc.) is called Neutral Grounding.

Neutral grounding provides protection to personal and equipment. It is because during earth fault, the current path is completed through the earthed neutral and the protective devices (e.g. a fuse etc.) operate to isolate the faulty conductor from the rest of the system. This point is illustrated in Fig. 26.10. 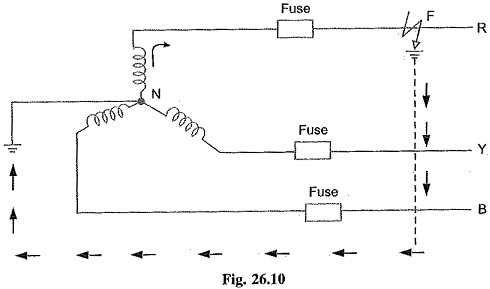 Fig. 26.10 shows a 3-phase, star-connected system with neutral earthed (i.e. neutral point is connected to soil). Suppose a single line to ground fault occurs in line R at point E This will cause the current to flow through ground path as shown in Fig. 26.10. Note that current flows from R-phase to earth, then to neutral point N and back to R-phase. Since the impedance of the current path is low, a large current flows through this path.

This large current will blow the fuse in R-phase and isolate the faulty line R. This will protect the system from the harmful effects (e.g. damage to equipment, electric shock to personnel etc.) of the fault. One important feature of grounded neutral is that the potential difference between the live conductor and ground will not exceed the phase voltage of the system i.e. it will remain nearly constant.

The following are the advantages of neutral grounding :

The methods commonly used for grounding the neutral point of a 3-phase system are :

The choice of the method of grounding depends upon many factors including the size of the system, system voltage and the scheme of protection to be used.