The process of connecting some electrical part of the power system (e.g. neutral point of a star-connected system, one conductor of the secondary of a transformer etc.) to earth (i.e. soil) is called System Grounding.

Depending upon the relative magnitudes of C1 and C2, it may be as high as 20% to 40% of the primary voltage. If a person touches either one of the secondary wires, the resulting capacitive current IC flowing through the body could be dangerous even in case of small transformers [See Fig. 26.5(U)]. For example, if IC is only 20 mA, the person may get a fatal electric shock.

If one of the secondary conductors is grounded, the capacitive coupling almost reduces to zero and so is the capacitive current IC As a result, the person will experience no electric shock. This explains the importance of system grounding. 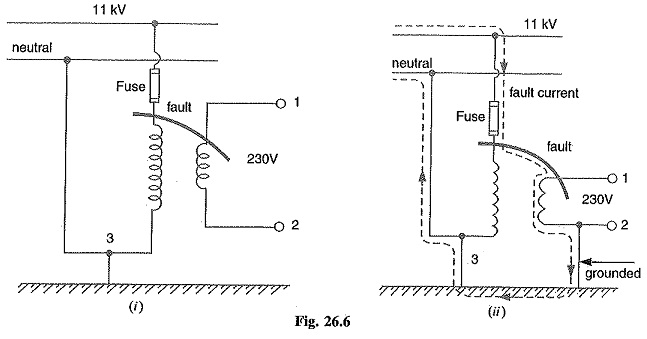 (ii) Let us now turn to a more serious situation. Fig. 26.6 (i) shows the primary winding of a distribution transformer connected between the line and neutral of a 11 kV line. The secondary conductors are ungrounded. Suppose that the high voltage line (11 kV in this case) touches the 230 V conductor as shown in Fig. 26.6 (i). This could be caused by an internal fault in the transformer or by a branch or tree falling across the 11 kV and 230 V lines. Under these circumstances, a very high voltage is imposed between the secondary conductors and ground. This would immediately puncture the 230 V insulation, causing a Massive flashover. This flashover could occur anywhere on the secondary network, possibly inside a home or factory. Therefore, ungrounded secondary in this case is a potential fire hazard and may produce grave accidents under abnormal conditions.

If one of the secondary lines is grounded as shown in Fig. 26.6(ii), the accidental contact between a 11 kV conductor and a 230 V conductor produces a dead short. The short-circuit current (Le. fault current) follows the dotted path shown in Fig. 26.6 (ii). This large current will blow the fuse on the 11 kV side, thus disconnecting the transformer and secondary distribution system from the 11 kV line. This explains the importance of system grounding in the line of the power system.