Therefore, CR=CY=CB=C (say). Since the phase voltages VRN,VYN and VBN have the same magnitude (of course, displaced 120° from one another), the capacitive currents IR, Iy and IB will have the same value i.e.

xc = Capacitive reactance of the line to ground.

The capacitive currents IR, Iy and IB lead their respective phase voltages VRN,VYN and VBN by 90° as shown in the phasor diagram in Fig. 26.8(11). The three capacitive currents are equal in magnitude and are displaced 120° from each other. Therefore, their phasor sum is zero. As a result, no current flows to ground and the potential of neutral is the same as the ground potential. There­fore, ungrounded neutral system poses no problems under normal conditions. However, as we shall see, currents and voltages are greatly influenced during fault conditions.

Circuit behaviour under single line to ground-fault: Let us discuss the behaviour of un­grounded neutral system when single line to ground fault occurs. Suppose line to ground fault occurs in line B at some point F. The circuit then becomes as shown in Fig. 26.9(1). The capacitive currents IR and Iy flow through the lines R and Y respectively. The voltages driving IR and Iy are VBR and VBY respectively. Note that VBR and VBY are the line voltages [See Fig. 26.9 (ii)]. The paths of IR and Iy are essentially capacitive. Therefore, IR leads VBR by 90° and Iy leads VBY by 90° as shown in Fig. 26.9 (ii). The capacitive fault current Ic in line B is the phasor sum of IR and Iy.

Fault current in line B, 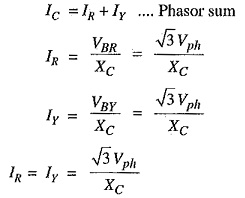 Therefore, when single line to ground fault occurs on an ungrounded neutral system, the follow­ing effects are produced in the system: