The majority of the insulating systems used in practice are solids. They can be broadly classified into three groups: organic materials, inorganic materials and synthetic polymers. Some of Solid Dielectrics Used in Practice materials are listed in Table 4.2 below.

The kind of paper normally employed for insulation purposes is a special variety known as tissue paper or Kraft paper. Paper and paper boards used for dielectric purposes are produced from cotton, organic fibres, mica, glass and ceramics. Generally, if the thickness of paper is 0.8 nun or higher it is called paper board. Boards of higher thickness are made by laminating many layers of paper with an adhesive to get the desired thickness. These are called pressboards and are used in transformers and bushings as supporting materials and insulating barriers. The thickness and density of paper vary depending on the application. Low-density paper (0.8 gms/cm3) is preferred in high frequency capacitors and cables, while medium density paper is used in power capacitors. High-density papers are preferable in d.c. and energy storage capacitors and for the insulation of d.c. machines.

Fibres when used for electrical purposes will have the ability to combine strength and durability with extreme fineness and flexibility. The fibres used are both natural and man-made. 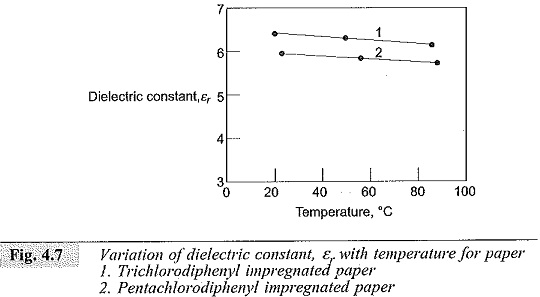 Mica and Its Products

Mica is the generic name of a class of crystalline mineral silicates of alumina and potash. It can be classified into four main groups: (i) muscovite, (ii) phlogopite, (iii) fibiolite, and (iv) lipidolite. The last two groups are hard and brittle and hence are unsuitable for electrical insulation purposes. Mica can be split into very thin flat laminae. It has got a unique combination of electrical properties, such as high dielectric strength, low dielectric losses, resistance to high

temperatures and good mechanical strength. These have made it possible for it to be used in many electrical apparatus. Very pure mica is used for high frequency applications. Spotted mica is used for low voltage insulation, such as for commutator segment separators, armature windings, switchgear and in electrical heating and cooling equipments.

Ceramics are inorganic materials produced by consolidating minerals into monolithic bodies by high temperature heat treatment. Ceramics can be divided into two groups depending on the Solid Dielectrics Used in Practice constant. Low permittivity ceramics (εr < 12) are used as insulators, while the high permittivity ceramics (εr > 12) are used in capacitors and transducers.

Plastics (Polymeric materials) used for electrical insulation purposes consist of long chain macromolecules with repeating monomer units. A polymer is named by putting the prefix poly in front of the monomer. For example propylene monomer becomes polypropylene. Some of the polymers used in current insulation practice are: polyethylene, PTFE, PVC, polypropylene, polystyrene.

Polytetrafluoroethylene (P.T.F.E.), polychlorotrifluoroethylene (P.C.T.F.E.) and polyvinylidene (P.V.F2) plastics come under this category. P.T.F.E. is the most thermally stable and chemically resistant of all the three. It is considered as one of the best plastics used for insulation because of its excellent electrical and mechanical properties. It can be used without decomposition up to temperatures of 327°C. It is widely used in almost all applications. P.C.T.F.E. has higher dielectric constant and loss factor than P.T.F.E., but melts at 190°C. P.V.F2 can be worked in the temperature range – 30°C to 150°C. It is used as thin wall insulation, as jacketing for computer wires and special control wires, and for tubing and sleeving for capacitors, resistors, terminal junctions, and solder sleeves.

Nylon is a thermoplastic which possesses high impact, tensile, and flexural strengths over a wide range of temperature (0 to 300°C). It also has high dielectric strength and good surface and volume resistivities even after lengthy exposure to high humidity. It is also resistant to chemical action, and can be easily moulded, extruded and machined. It is generally recommended for high frequency low loss applications. In electrical engineering, nylon mouldings are used to make coil forms, fasteners, connectors, washers, cable clamps, switch housings, etc.

Polyvinyl chloride or P.V.C. is used commercially in various forms. It is available as an unplasticized, tough, and rigid sheet material and can be easily shaped to any required form. It is chemically resistants to strong acids and alkalis and is insoluble in water, alcohol and organic solvents like benzene. The upper temperature limit of operation is about 60°C. The dielectric strength, volume resistivity and surface resistivity are relatively high. The Solid Dielectrics Used in Practice constant and loss tangent are 3.0-3.3 and 0.015-0.02 respectively, at all frequencies up to 1 MHz.

Polyesters have excellent dielectric properties and superior surface hardness, and are highly resistant to most chemicals. They represent a whole family of thermosetting plastics produced by the condensation of dicarboxylic acids and dihydric alcohols, and are classified as either saturated or unsaturated types. Unsaturated polyesters are used in glass laminates and glass fibre reinforced mouldings, both of which are widely used for making small electrical components to very large structures. Saturated polyesters are used in producing fibres and film. Polyester fibre is used to make paper, mat and cloth for electrical applications. The film is used for insulating wires and cables in motors, capacitors and transformers.

Polystyrenes are obtained when styrene is polymerized with itself or with other polymers or monomers producing a variety of thermoplastic materials with varying properties in different colours. Electrical grade polystyrenes have a dielectric strength comparable to that of mica, and have low dielectric losses which are independent of the frequency. Their volume resistivity is about 1019 ohm-cm and the Solid Dielectrics Used in Practice strength is 200-350 kV/cm. The dielectric constant at 20°C is 2.55, and the loss tangent is 0.0002 at all frequencies up to 10,000 MHz.

Epoxy resins are thermosetting types of insulating materials. They possess excellent dielectric and mechanical properties. They can be easily cast into desired shapes even at room temperature. They are very versatile, and their basic properties can be modified either by the selection of curing agent or by the use of modifiers or fillers. They are highly elastic; samples tested under very high pressure, up to about 180,000 psi (12,000 atm) returned to their original shape after the load was removed, and the sample showed no permanent damage. Resistance to weathering and chemicals is also very good. The tensile strength of araldite CT 200 and hardner HV 901 is in the range 5.5-8.5 kg/mm2, and the compressive strength is 11-13 kg/mm2 The Solid Dielectrics Used in Practice constant varies between 2.5 and 3.8. The dielectric loss factor is very small under power frequency conditions lying in the range 0.003-0M3. The dielectric strength is 75 kV/nun, when the specimen thickness is 0.025 mm or I mil. The volume resistivity of the material is of the order of 1013 ohm-cm.