An Operational Amplifier Definition is a dc amplifier having a high gain, of the order of 104 — 108. Such an amplifier can perform summing, integration, differentiation, or act as com­parator with suitable feedback networks. Hence these are known as opamps. (In such circuits the required response is obtained by the application of negative feedback to a high gain dc amplifier by means of a component connected be­tween input and output terminals, referred to as operational feedback).

An Operational Amplifier Definition is a dc high gain amplifier usually consisting of one or more cascaded differential amplifier stages.

The block diagram of an Operational Amplifier Definition shown in Fig. 14.5 consists of a four stage direct coupled amplifier in cascade. In summarized form, it can be stated as follows. 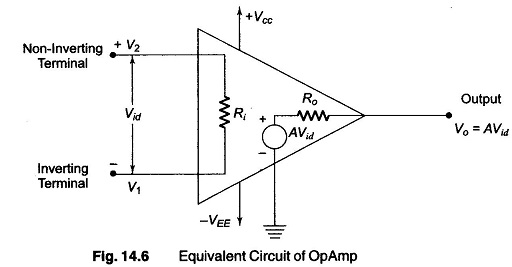 By the use of negative feedback a practical Operational Amplifier Definition can be brought close to some of the above characteristics, such as input resistance, output resistance and bandwidth. The equivalent circuit of an opamp is shown in Fig. 14.6.

The basic operating principles of an opamp can be analysed with the help of the equivalent circuit shown in Fig. 14.6. The output voltage for Fig. 14.6 is given by

V1 = voltage at Inverting terminal with respect to ground

V2 = voltage at non-inverting terminal with respect to ground.