The conveyance of electric power from a power station to consumers’ premises is known as Electric Supply System.

An electric supply system consists of three principal components viz., the power station, the transmission lines and the distribution system. Electric power is produced at the power stations which are located at favorable places, generally quite away from the consumers. It is then transmitted over large distances to load centres with the help of conductors known as transmission lines. Finally, it is distributed to a large number of small and big consumers through a distribution network.

The electric supply system can be broadly classified into 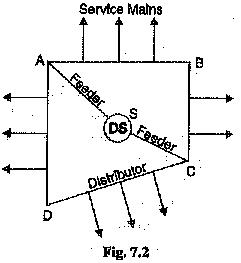 4.Primary distribution: The secondary transmission line terminates at the sub-station (SS) where voltage is reduced from 33 kV to 11kV, 3-phase, 3-wire. The 11 kV lines run along the important road sides of the city. This forms the primary distribution. It may be noted that big con-sumers (having demand more than 50 kW)are generally supplied power at 11 kV for further handling with their own sub-stations.

Note. A practical power system has large number of auxiliary equipments (e.g., fuses, circuit breakers, voltage control devices etc.). However, such equipments are not shown in Fig. 7.1. It is because the amount of information included in the diagram depends on the purpose for which the diagram is intended. Here our purpose is to display general lay out of the power system. Therefore, the location of circuit breakers, relays etc., is unimportant.

Further, the structure of power system is shown by a single line diagram. The complete 3-phase circuit is seldom necessary to convey even the most detailed information about the system. In fact, the complete diagram is more likely to hide than to clarify the information we are seeking from the system viewpoint.