The term solid-state is used deliberately here; it does not mean “semiconductor.” In terms of the somewhat older maser parlance, it means the opposite of gaseous, i.e., ruby. The cross section of a Cryogenically Cooled Amplifiers is shown in Figure 12-38. It is seen to be a single-port amplifier, so that a circulator is needed, just as in so many other microwave amplifiers. In the parametric amplifier, a tuned circuit must be provided for the pump signal as well as for the signal to be amplified. This is not difficult to achieve, but it should be realized that the cavity must be able to oscillate at both frequencies. 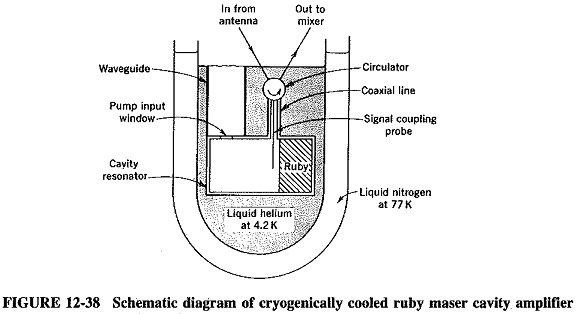 From a communications point of view, a disadvantage of the cavity maser is that its bandwidth is very narrow, being governed to a large extent by the cavity itself. It may be typically 1.5 MHz at 1.5 GHz, but some compromise at the expense of gain is possible, noting that the gain-bandwidth product is about 35 MHz. Increasing the bandwidth to even 25 MHz is not practicable, however, since gain by then would not be much in excess of unity.

The resulting operating system is then virtually identical to the one used in the TW paramp. The signal to be amplified now travels along the ruby via a slow-wave structure and grows at the expense of the pump signal. The traveling-wave maser has not only an increased bandwidth but also effectively four terminals, so that a circulator is no longer needed. Such TW masers are used in some older satellite earth stations, built before the subse­quent paramp developments.

A typical TW maser operating at 1.6 GHz may have a 25-dB gain, a bandwidth of 25 MHz and a 48-GHz pump requiring 140 mW of CW power. The last two figures are also applicable to the cavity maser, and both types are capable of a noise temperature better than 20 K, i.e., a noise figure better than 0.3 dB.

A disadvantage of the maser is that it is a very low-level amplifier and may saturate for input levels well over 1 μW. While this makes it suitable for radioastron­omy and other forms of extraterrestrial communications, radar is a typical application in which a maser could not be used. Not only can much larger radar signals be received in the course of duty, but so can jamming. This would certainly overload a maser RF amplifier, though fortunately without permanent damage.

The maser would take about 1 s to recover, during which it would be unusable. Care must be taken not to point the antenna at the ground when a maser amplifier is used, or the ground temperature will create sufficient noise to overload the maser once again.

The Cryogenically Cooled Amplifiers has undergone many improvements in the last decade; therefore the maser is not used as frequently as it once was. Compared to the paramp it is bulkier and more fragile, though somewhat less affected by pump noise or frequency fluctuations. It is narrower in bandwidth and easier to overload, which also means that its dynamic range is not as large. The Cryogenically Cooled Amplifiers has approached the maser’s noise performance.

The main application for the maser now is in radiotelescopes and receivers used for communications with space probes. Its applications lie where the lowest possible noise is of the utmost importance.